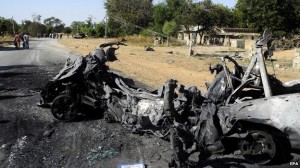 Ghana’s President John Mahama has said he and other African leaders will discuss plans next week to “deal permanently” with Boko Haram militants.

He said he wanted African Union (AU) countries to produce a “specific plan of action” for tackling the Nigeria-based Islamist group collectively. “This has to end. We have to make this terror end,” he said. Boko Haram has seized control of many towns and villages in north-east Nigeria in a six-year insurgency. It has also begun threatening Nigeria’s neighbours and earlier this week launched a raid on a military base in northern Cameroon. Cameroon fight Mr Mahama said: “We must find a way to act together to share information, to synchronise our strategies, to pool our resources in order to rid the entire African continent of terrorism. “We cannot stand by silently, idly waiting for the international community to intervene on our behalf.” He said the crisis over Boko Haram was “increasingly getting to the point where probably a regional or a multinational force is coming into consideration”. Earlier, Cameroon said Chad was sending a large contingent of troops to help it fight incursions by Boko Haram. It came three days after Cameroon said it had killed 143 Boko Haram militants who had attacked one of its army bases at Kolofata near the Nigerian border. It was the first major attack on Cameroon since Boko Haram threatened the country’s leader in a video posted online earlier this month. Boko Haram used to be viewed as Nigeria’s problem – local militants spreading chaos in one corner of a big country. But that chaos is spreading fast. And with refugees now pouring into neighbouring countries, Cameroon, Niger and Chad are promising to join forces to contain and crush Boko Haram. So far there’s been more talk than action. Obstacles include the usual political rivalries, funding, logistics, long borders, and the sharing of sensitive information between foreign armies. The African Union now has a chance to play a coordinating role – it’s done so successfully in places like Somalia. But ultimately Nigeria needs to solve this itself and its army is struggling A French-led initiative called for Nigeria, Niger, Cameroon and Chad to contribute 700 troops each to a multinational force against Boko Haram, but no country has taken steps to implement the plan. Chad previously had some troops based in Baga, a Nigerian town seized by Boko Haram earlier this month, but they had been withdrawn before the attack. Niger and Cameroon have both criticised Nigeria for failing to do more to confront Boko Haram. 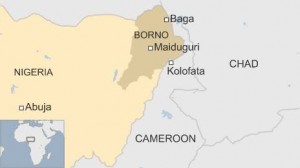 Correspondents say Nigerian politicians appear more focused on campaigning for elections next month than on security issues, and senior figures rarely comment on the insurgency in the north-east. On Thursday, President Goodluck Jonathan made an unannounced visit to the area, his first for nearly two years. He told displaced people in the biggest city of Borno state, Maiduguri, that he was “working very hard” to help them return to their homes. Mr Jonathan’s visit came as the human rights group Amnesty International released satellite images of towns attacked by Boko Haram, suggesting widespread destruction and a high death toll. The pictures showed about 3,700 structures damaged or destroyed in Baga and neighbouring Doron Baga last week, the rights group said. Nigeria’s government has disputed reports that as many as 2,000 people were killed in and around Baga, putting the number of dead at no more than 150. *Source BBC]]>