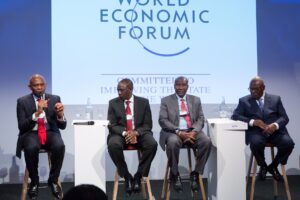 Mr. Tony O. Elumelu, CON speaking at the 2015 World Economic Forum, in Davos, Switzerland[/caption] Speaking at a high profile panel on energy at the 2015 annual meeting for the World Economic Forum in Davos, Switzerland, Nigerian billionaire and philanthropist Tony Elumelu emphasized the key priority for 2015 for Africa as “policy, policy, policy”. Launching the African Energy Leaders Group (AELG), a multi-stakeholder advocacy group that aims to address Africa’s power deficiency; the continent has approximately 620 million people without electricity, Mr. Elumelu said “investors in this space are rational. The risks are huge; the capital requirements are equally huge. If you want to invest in this space, you have to first survey the environment beyond economics; policy, stability, enforceability of rules, the nature of the regulatory framework. If the right policies are in place, investors and financiers will be encouraged to invest.” AELG will bring the continent’s leaders together in an effort to build public – private partnerships, leverage political support and mobilize funds for sustainable energy and development. Created by a working group of African leaders including billionaires Mr. Elumelu, Aliko Dangote; Donald Kaberuka, President of the African Development Bank, Prime Minister Daniel Duncan of Ivory Coast and President John Mahama of Ghana, AELG’s mission takes the form of three pillars; driving universal access, driving efficiency and driving renewables. “Currently, every single African country is experiencing energy shortages and power outages. This costs the continent 2% of its GDP,” said Kaberuka, “We are a continent of miracles; if we are growing at 5% without enough electricity, think of what the continent could do with enough electricity.” Kaberuka also added that the African Development Bank does $5 billion of infrastructure per year; half of that investment is spear-marked for energy, in both the private and public sectors. Mr. Elumelu (@TonyOElumelu), the leading voice highlighting the African private sector agenda at WEF was the third most tweeted person at Davos after Bill Gates and Kenneth Roth (Executive Director, Human Rights Watch). Using the hashtag #AfricaAtDavos to drive the African agenda during the annual meeting, some of Mr. Elumelu’s top tweets included; ‘In Africa we need one thing…ENERGY #AfricaAtDavos #wef15’; ‘1 million people in Africa share an average of 91-megawatts of electricity while in the US the same number of people consume an average of 3360-megawatts #AfricaAtDavos’; ‘Powering Africa therefore is not a choice between coal, gas, hydro, wind, solar or between grid and off-grid. We need all to fill the huge deficit’; ‘We need government to set predictable policies on power so investors know they can recoup their investment #AfricaAtDavos #wef15’. This aligned with Africapitalism, an economic philosophy that Mr. Elumelu created, that calls for long-term investments in key sectors in Africa, to spark economic prosperity and social wealth. At a time when new leadership in Africa is required to address increasingly complex and interlinked global problems; a new set of African leaders are stepping up to contribute towards Africa’s solutions. The complex, volatile, interconnected nature of the world’s economies and societies, means that Africa can be both the source and the solution to many of these issues. As such, Mr. Elumelu spoke on several high-level panels on energy, Ebola, access to capital among others and hosted key events during the annual meeting, which was themed “The New Global Context.” Africa is engaging more strategically and proactively than ever before at WEF; “In the past, political leaders led the discussions but increasingly, business leaders from Africa are leading and driving the agenda on Africa and engaging with their peers around the world,” said the revered business leader. Mr. Elumelu and Mr. Dangote hosted a high-profile CEO breakfast at WEF because according to Mr. Elumelu while the perception on Africa was changing, “one of the primary reasons why investors do not invest in Africa, is because they do not know what is happening on the continent.” Listed on FORBES Africa’s 50 Richest, Mr. Elumelu is the founder and Chairman of Heirs Holdings, a privately held investment vehicle, with interests in the power, resources, financial services and hospitality sectors and founder of The Tony Elumelu Foundation, which focuses on empowering entrepreneurship across Africa. *Source forbes.]]>