Like Isil in the Middle East, Boko Haram-land has a capital, army and self-styled leader   By David Blair* 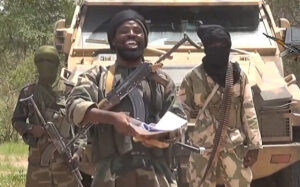 A still from a video released by the Nigerian Islamist extremist group Boko Haram Photo: AFP/Getty Images[/caption] You might not have noticed, but the world has acquired a new country. With its own capital, army and self-styled “emir”, this domain possesses some of the features of statehood. But don’t expect an application to join the United Nations: the consuming ambition of this realm is to reverse just about every facet of human progress achieved over the past millennium.
Boko Haram, the radical Islamists responsible for enslaving the Chibok schoolgirls and killing hundreds of people in the past week alone, have carved out a heartland in the plains of northern Nigeria.
Every insurgency tries to graduate from launching hit-and-run attacks to controlling territory. Boko Haram has now crossed this vital threshold. Scores of towns and villages have fallen into the hands of its gunmen across the states of Borno and Yobe. Today, Boko Haram rules a Belgium-sized domain with a surface area of about 20,000 square miles and a population of at least 1.7 million people. The capital, incidentally, is a town called Gwoza; the terrorist state’s army is comprised of Boko Haram’s fearsomely well-equipped insurgents; and the “emir” is a maniacal figure called Abubakar Shekau.
For the second time in less than three years, an African government has been sufficiently absent-minded to lose a swathe of its country. Ever since the attacks on September 11, a central goal of Western counter-terrorism policy has been to prevent al-Qaeda or its allies from controlling territory. But, somehow, it keeps happening – over and over again.
Back in 2012, al-Qaeda’s affiliate in North Africa managed to take over two thirds of Mali, achieving mastery over an area three times the size of Britain. France’s brilliantly executed intervention broke al-Qaeda’s grip on that domain in 2013, but there is no prospect of Boko Haram being similarly defeated in Nigeria.
As Shekau proclaims the birth of his new African “Caliphate” – to go with the similar creation of Islamic State (Isil) in the Middle East – three questions arise: How did it come to this? How dangerous is the world’s newest country? And, most vitally of all, what is to be done? The first question is easiest to answer: Boko Haram achieved its advances because of the corruption and incompetence of the Nigerian state. Now that a string of towns has fallen, the failure of the country’s army to stand up to the insurgents is glaring. Partly, that is explained by the fact that the Nigerian armed forces are relatively small: the army has only 62,000 soldiers to defend a country four times bigger than Britain, with no fewer than 180 million people. But that is not the sole reason for the failure. Instead of spending their generous security budget – more than £4 billion in 2014 – on proper weapons and equipment, Nigerian generals tend to pocket the money themselves or blow it on showpiece helicopters that attract generous commissions but are of precious little use against Boko Haram. The result is that the beleaguered 7th Division, which has primary responsibility for fighting Boko Haram, confines itself to mounting a static defence of Maiduguri, the capital of Borno state. Back in 2013, the Islamists managed to destroy most of this unit’s helicopters. Lacking the means to wage a mobile war and crippled by a venal and inept leadership, the 7th Division has made no serious effort to recapture territory from Boko Haram. As for the dangers posed by the birth of Boko Haram-land, the immediate threat is that the new state will become a base for more conquests. That has already happened, with the town of Baga falling last Wednesday and the Islamists launching regular raids over the border into neighbouring Cameroon. Does this pose a wider peril, stretching beyond West Africa? At the moment, the answer is probably not. Boko Haram shares the anti-Western fanaticism of al-Qaeda, but the insurgency stubbornly fails to conform to neat categories. Even its name is not what it seems. Boko Haram is generally taken to mean “Western education is banned”, but “Boko” means book in the Hausa language, so “books are banned” would be a more accurate translation. By implying that their campaign is motivated by an objection to “Western education”, we risk allowing Boko Haram to appear less atavistic than they actually are. Around an Islamist core, the insurgents also consist of local criminals and, indeed, tribal insurgents from Shekau’s own Kanuri-speaking people. Whether these various strands have any interest in striking Western targets beyond Nigeria is open to question. But the lesson from the period of Taliban rule in Afghanistan in the Nineties is that even if that intention does not exist today, it will develop if enough time passes. And that brings us to the question of what can be done? In the end, this is a problem that only Nigeria can solve, firstly by building its army into a force capable of recovering the lost territory. The West can offer training, intelligence and advice. And America’s drone campaign in Pakistan has also demonstrated that a sophisticated effort to suppress terrorism can succeed even without a reliable force on the ground. If Boko Haram continue to advance – and if their atrocities continue – then northern Nigeria could be the next theatre for a drone offensive. The alternative may be to watch the steady expansion of Africa’s newest country. *Source telegraph
]]>