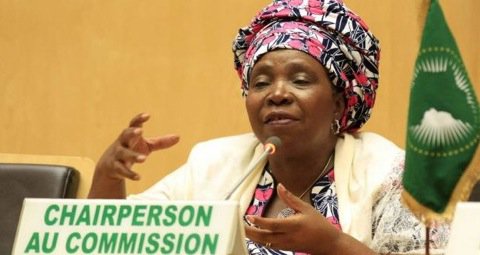 Nkosazana Dlamini-Zuma, the chairperson of the African Union Commission. Photo©Reuters[/caption] Nkosazana Dlamini-Zuma, the chairperson of the African Union Commission, on Monday urged African countries to make collective effort in combating human trafficking and the threat posed by Boko Haram in West Africa. Addressing the 26th Ordinary Session of the Executive Council of the AU, which is composed of the Ministers of Foreign Affairs of AU member States, Zuma said she was appalled by Boko Haram. “I am deeply horrified by the tragedy Boko Haram continues to inflict on our people,” she said, telling members of the Executive Council “we should all declare this state of affairs as unacceptable.” The Islamist insurgency group, which was first a localised criminal gang, is now posing threats to West and Central Africa, killing 2,000 people in one village and infamously abducting more than 200 girls in northern Nigeria. Dlamini-Zuma acknowledged individual efforts made by Chad in its readiness to assist Cameroon in the fight against Boko Haram. However, “this is not just a threat to some countries. It is a threat to the whole continent. It is a global threat that must be met globally, but with Africa in the lead,” she told the foreign ministers. In her speech that set the tone for this week’s meetings that will culminate in the assembly of heads of states and governments of the AU in Addia Abba, Zuma mentioned pockets of success in the continent, “but we need to do much more”. “The youth have said to us that one of their biggest handicaps is access to start-up capital, and internet services across,” she said. “We must do more and better for African youth.” The Council is currently discussing on various measures Africa needs to take, based on AU’s area of recommendations, which includes investments in education, science and technology, and more. “These measures, aimed at giving our young people a stake in their countries and continent, are the surest way of tackling the problem of African youth migration and trafficking and them falling prey to extremism,” she said. The AU also said it is currently taking the initiative to lead efforts to avert challenges the continent has faced, including extremism. Zuma said these efforts need collective endeavour. The ministers are presently discussing conflict management, but are expected to touch upon issues such as the Ebola crisis, alternative sources of financing, AU peace keeping and youth employment among others. The outcomes of their discussion will be presented for adoption during the 24th Ordinary Assembly of the Heads of State and Government, which will take place on January 30 to 31 at the same venue. * Source theafricareport]]>