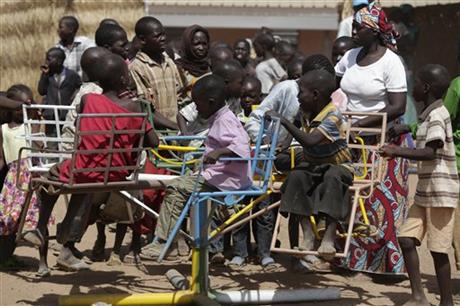 n this Thursday Nov. 27, 2014 photo, children displaced after attacks by Boko Haram, play in the camp of internal displaced people, in Yola, Nigeria. Seven children have been reunited with parents lost in the chaos of attacks in Nigeria’s northeastern Islamic insurgency but hundreds more remain alone, officials say of youngsters who have no idea if their families are alive or dead. (AP Photo/Sunday Alamba)[/caption] YOLA, Nigeria (AP) — Hundreds of bodies — too many to count — remain strewn in the bush in Nigeria from an Islamic extremist attack that Amnesty International suggested Friday is the “deadliest massacre” in the history of Boko Haram. Mike Omeri, the government spokesman on the insurgency, said fighting continued Friday for Baga, a town on the border with Chad where insurgents seized a key military base on Jan. 3 and attacked again on Wednesday. “Security forces have responded rapidly, and have deployed significant military assets and conducted airstrikes against militant targets,” Omeri said in a statement. District head Baba Abba Hassan said most victims are children, women and elderly people who could not run fast enough when insurgents drove into Baga, firing rocket-propelled grenades and assault rifles on town residents. “The human carnage perpetrated by Boko Haram terrorists in Baga was enormous,” Muhammad Abba Gava, a spokesman for poorly armed civilians in a defense group that fights Boko Haram, told The Associated Press. He said the civilian fighters gave up on trying to count all the bodies. “No one could attend to the corpses and even the seriously injured ones who may have died by now,” Gava said. An Amnesty International statement said there are reports the town was razed and as many as 2,000 people killed. If true, “this marks a disturbing and bloody escalation of Boko Haram’s ongoing onslaught,” said Daniel Eyre, Nigeria researcher for Amnesty International. The previous bloodiest day in the uprising involved soldiers gunning down unarmed detainees freed in a March 14, 2014, attack on Giwa military barracks in Maiduguri city. Amnesty said then that satellite imagery indicated more than 600 people were killed that day. The 5-year insurgency killed more than 10,000 people last year alone, according to the Washington-based Council on Foreign Relations. More than a million people are displaced inside Nigeria and hundreds of thousands have fled across its borders into Chad, Cameroon and Nigeria. [caption id="attachment_15344" align="alignright" width="460"] 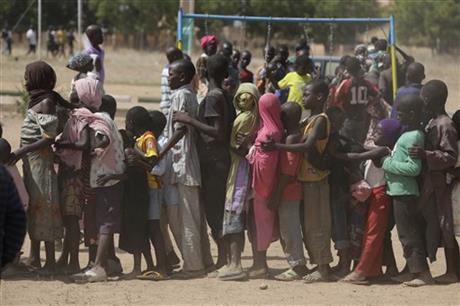 In this Thursday Nov. 27, 2014 photo, children displaced after attacks by Boko Haram, line up in the camp of internal displace people, in Yola, Nigeria. Seven children have been reunited with parents lost in the chaos of attacks in Nigeria’s northeastern Islamic insurgency but hundreds more remain alone, officials say of youngsters who have no idea if their families are alive or dead. (AP Photo/Sunday Alamba, file)[/caption] Emergency workers said this week they are having a hard time coping with scores of children separated from their parents in the chaos of Boko Haram’s increasingly frequent and deadly attacks. Just seven children have been reunited with parents in Yola, capital of Adamawa state, where about 140 others have no idea if their families are alive or dead, said Sa’ad Bello, the coordinator of five refugee camps in Yola. He said he was optimistic that more reunions will come as residents return to towns that the military has retaken from extremists in recent weeks. Suleiman Dauda, 12, said he ran into the bushes with neighbors when extremists attacked his village, Askira Uba, near Yola last year. “I saw them kill my father, they slaughtered him like a ram. And up until now I don’t know where my mother is,” he told The Associated Press at Daware refugee camp in Yola. *Source AP/huffingtonpost