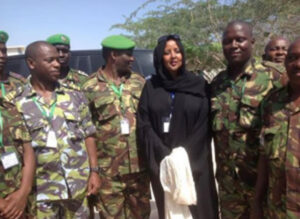 CS Amina with KDF troops in Somalia.[/caption] Foreign Affairs Cabinet Secretary Amina Mohammed on Saturday visited the Kenya Defence Forces troops in Somalia. Amina had a brief chat with the soldiers, a move seen as “morale boosting”. The forces have been in the troubled country since 2011. The CS attended the 53rd Extraordinary Summit of the Intergovernmental Authority on Development in Mogadishu. Amina is the highest-ranking government official to visit the country after former Foreign Affairs minister Sam Ongeri in 2012. Ongeri survived a bomb attack targeted at the hotel he was staying in. The high-level Igad summit is the first of its kind in 24 years after civil war broke out in Somalia. Previous efforts to hold the summit faced security concerns after al Shabaab carried out a series of attacks in major government installations. Foreign ministers from Igad member states, including Ethiopia, Uganda, South Sudan and Sudan pledged to support Somalia in the fight against al Shabaab.   *Source hiiraan/The Star]]>