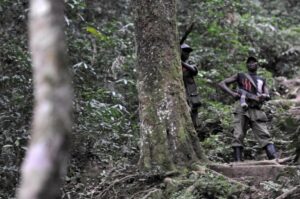 Johannesburg (AFP) – African heads of state will meet later this month to decide how to disarm Rwandan Hutu rebels ravaging the troubled east of the Democratic Republic of Congo who have refused an ultimatum to surrender.

Less than a quarter of fighters from the Democratic Forces for the Liberation of Rwanda (FDLR) turned themselves in before the January 2 deadline set by regional leaders.

“The FDLR has therefore not complied in full with the conditions imposed,” he said.

Heads of state from the region will meet in Angola on January 15 and 16 to decide on how to respond, with Zuma saying SADC was “ready to play its fullest part in this regard”.

In October 2013, the Congolese army and a force of UN soldiers from South Africa, Tanzania and Malawi — authorised to neutralise armed groups — forced the surrender of M23, another rebel group in the area.

“In the interim, SADC launches an earnest and urgent appeal on the leadership of the FDLR and all remaining combatants to immediately and unconditionally present themselves for disarmament,” Zuma said in a statement.

As the deadline expired on Friday, the head of the UN mission in the DRC Martin Kobler appealed to the rebels to seize the chance for peace.

“To all FDLR, you can help stabilize your area by reaching MONUSCO or the Congolese authorities and return to peaceful life in Rwanda,” he wrote on Twitter, referring to the UN’s MONUSCO peacekeeping mission.

The FDLR is estimated to include between 1,500 and 2,000 ethnic Hutu fighters, some of whom are accused of having participated in the 1994 Rwandan genocide.

Opposed to Rwandan President Paul Kagame’s Tutsi government, they have for years been based across the border in eastern DRC, where they have been accused of staging brutal attacks on civilians, including rapes and murders, and smuggling gold and charcoal.