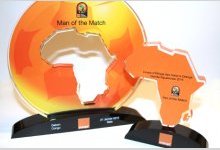 A footballer dressed in white garb dribbles a ball across an abandoned underground construction site, laser focused, dust stirring up around him as he angles for the winning kick — he takes it and scores. The scene: part of a video ad by FAO that will be shown throughout the upcoming African Cup of Nations; the winning kick: a metaphor for overcoming hunger in Africa by 2025. The initiative is part of “African Football Against Hunger”, a collaboration between FAO and the Confederation of African Football (CAF) to highlight the breakthrough commitment by African leaders to end hunger in the next decade. The campaign leverages the global popularity of “footie” to spread a message of solidarity: African nations can defeat hunger in our lifetime, but they need collective action and popular support to reach their goal. https://www.youtube.com/watch?v=woANC-1JFL0 “Eradicating hunger requires teamwork and perseverance — the same qualities that players in the Nations Cup show us on the field,” said José Graziano da Silva, FAO´s Director-General. Adequate nutrition, he stressed, is essential to reaching one’s goals, athletic or otherwise. “Football brings together people from all over the continent and that makes it the ideal platform to call for solidarity and bring people across Africa on board with our joint effort to raise the bar in the fight against hunger” added Mario Lubetkin, FAO´s Director of Communications, during a press conference in Bata, Equatorial Guinea, on the eve of the opening of the African Cup of Nations. Unlike the invisible opponent in the video, hunger across the continent is tangible. In sub-Saharan Africa alone, 223 million people — or one in four — is undernourished. This hampers their ability to lead healthy, productive lives and holds Africa as a whole back from reaching its full potential. That potential is significant. Africa is home to seven out of 10 of the planet’s fastest growing economies and has the youngest population of any other continent. At the same time, regional markets are still dominated by foreign food imports and youth unemployment runs high. Investing in agricultural development now could put the sector at the heart of inclusive growth that boosts youth employment, strengthens rural livelihoods and meets the food challenges of a growing world population. Making hunger history Last year, African governments came together and made a historic commitment to wipe out chronic hunger among their peoples by 2025, in sync with the UN’s “Zero Hunger” campaign. One solid step in this direction has been the establishment of the Africa Solidarity Trust Fund in 2013, the first Africa-for-Africa fund, which has so far leveraged some $40 million from African states (primarily Equatorial Guinea and Angola) for projects that increase employment opportunities for youth, build resilience of livelihoods to crisis situations, improve the management of natural resources, and support sustainable food production with the goal of eradicating hunger. Operating under the mantra that sustainable development comes from within, the fund – which is administered by FAO and key stakeholders and pools money from the continent’s strongest economies — has so far supported projects in more than 30 countries across Africa. The work of FAO and the Fund complements the Comprehensive Africa Agriculture Development Program (CAADP), a home-grown, region-wide cooperative effort to boost agricultural productivity that was launched by governments ten years ago. To realize the vision of a food-secure Africa, it’s widely understood that investments in agricultural development, strong social safety nets and rights to access land and water are essential. So is the support for small-scale farmers, who work more than 60 percent of the agricultural land. 2015: a pivotal year The African Cup of Nations takes place in a pivotal year for international development, with the Millennium Development Goals coming to an end and the international community finalizing a set of Sustainable Development Goals to take their place. Sustainable livelihoods and food security are likely to be cornerstones of the new development agenda.   “This is the time for governments, institutions and civil society on the continent to come together and double down on efforts to make hunger history,” Lubetkin said. Sixteen teams will compete in the Africa Cup of Nations from Jan 17. to Feb. 8 in venues across Equatorial Guinea. *APO/FAO  ]]>