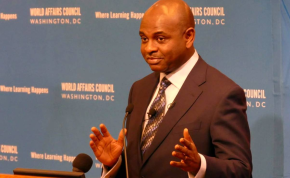 Kingsley Chiedu Moghalu addressing the World Affairs Council in Washington, DC.[/caption] Is Africa really rising? What does the continent’s booming economic growth mean for its people, and will it lead to inclusive, sustainable development? How can Africa unlock its development potential and bring prosperity to all? And what lessons do these challenges offer to an understanding of what development really means? These are some of the tough questions that Kingsley Moghalu, a former deputy governor of the Central Bank of Nigeria, senior United Nations official, and founder and CEO of Geneva-based global strategy and risk advisory firm Sogato Strategies, tackles in his latest book: “Emerging Africa: How the Global Economy’s ‘Last Frontier’ Can Prosper and Matter.” Arguably the most profound recent book on the subject, “Emerging Africa” goes beyond simplistic views of Africa’s future to tackle the reasons — and more importantly, the solutions — for the continent’s most pressing problems. It asserts that Africa can not only prosper but finally gain more traction in the world through a far-reaching economic transformation of its economic system, which requires a total reinvention of the African mindset. Moghalu uniquely combines in his latest work an interdisciplinary approach grounded in philosophy, economics, strategy and risk management to explain how societies can rise from poverty to prosperity. He also provides insight on Africa’s past, present and future trajectory, contending that the continent is indeed emerging, but has not yet risen. It will, he argues, only rise once Africans develop and act on the basis of a clear “world view,” a global perspective on their own problems — and the solutions they need to implement to achieve radical economic transformation towards becoming the “new Asia” in the 21st century. Published by Penguin Books in July and described by the Financial Times as “a welcome last word on the Africa Rising narrative,” the book is garnering global attention and can be considered as a marked departure from the prevailing wisdom of external experts. This, Moghalu said, is because the book represents a “clear demonstration of the capacity latent inside the continent to analyze and fix its own problems.” Insider looking out, or outsider looking in? With over two decades of international experience in global development and economic policy, Moghalu has seen himself as somewhat of an insider looking out when giving advice to policymakers, he told Devex in an exclusive interview just days after stepping down as deputy governor of Nigeria’s central bank in November. During his five-year term, Moghalu said the institution performed quite well and played an important role in the development of Africa’s most populous nation. Monetary authorities, he explained, can become an agent for change across Africa if they are truly independent and allowed to participate in the country’s economic transformation beyond simply providing macroeconomic stability. “Strong institutions are critical to provide the foundations of economic transformation,” he noted, adding that strong institutions in his opinion are those that “have strategies that are adopted and executed with discipline” — an approach that needs to be coupled with a new African mindset that understands that development and economic transformation don’t happen by chance, but are rather “the outcomes of long-term strategy, effectively executed.” At a time when many Western economies are still struggling to fully recover from the global financial crisis, Moghalu believes that central banks and other institutions — if properly strengthened and acting in a strategic way — can help Africa “grasp the opportunity to do things differently.” 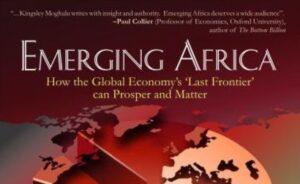