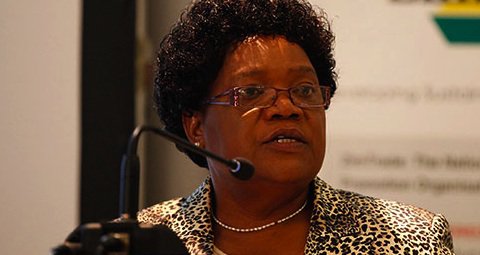 Former Zimbabwean vice-president, Joice Mujuru, was the youngest minister in 1980 and was elevated to the vice presidency in 2004[/caption] Sacked Zimbabwe Vice- President Joice Mujuru has refused to talk about her future after her sacking by President Robert Mugabe, sparking speculation she could challenge the veteran ruler. Mujuru said Mugabe used a non existent law to fire her on Monday for her alleged role in the plot to assassinate the 90 year-old leader. “The letter said I was no longer vice-president of Zimbabwe, full stop,” she said. “And he quoted Section 102 (1b) of the Constitution, which I tried to check, but did not get, maybe he wanted to say Section 2b.” Mugabe also sacked eight ministers he accused of working with Mujuru in a plot to oust him. The veteran ruling Zanu PF leaders were dropped from the party’s top organs in the unprecedented purge. Mugabe said Mujuru had been fired because “it had become evident that her conduct in the discharge of her duties had become inconsistent with the expected standard, exhibiting conflict between official responsibilities and private interests”. The former vice-president was the youngest minister in 1980 and has been in government since. She was elevated to the vice presidency in 2004. “It’s too early for me to say…I am not a fighting character,” Mujuru said in response to the sacking. However, political analyst Charles Mangongera said the 59 year old politician might fight back. “From her statements, one can sense she will launch a legal fight,” he said. “She will certainly not take it lying down.” Some observers believe Mujuru and her allies would form a political party to challenge Mugabe who has been in power since 1980. “Those who have been sacked are people with a significant social base. “They are no pushovers. They are people with a significant following”. Mangongera “If elections were called today you would be 100 percent guaranteed that Zanu PF would lose.” Another political analyst Trust Matsilele said Mujuru may consider a coalition with other opposition parties. He said the sacking of Mujuru showed that the party had been hijacked by Mugabe’s wife, Grace who recently took over the powerful post of secretary for women’s affairs in Zanu PF. “Zimbabwe has started a path towards a monarchy and the only way this minor clique in Zanu PF will retain power will be through violence, coercion of State actors and apparatus and stealing of elections,” he said. “The ultimate firing of Mujuru once again confirms a country being governed not by the president, but by his wife. “The most interesting out of all this is that now Zanu PF is being run by an unpopular cabal, unpopular both within the broader Zanu PF and Zimbabwe at large.” The First Lady started demanding Mujuru’s ouster in October accusing her of corruption and plotting to oust Mugabe. *Source theafricareport]]>