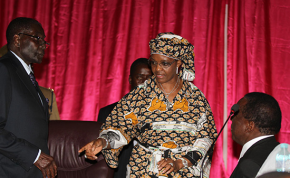 Photo: New Zimbabwe
President Robert Mugabe and his wife Grace talk with vice president-elect Emmerson Mnangagwa after the announcement of his appointment.[/caption] A plot to assassinate vice president-elect Emmerson Mnangagwa suffered a still-birth on Tuesday but left his personal assistant fighting for her life in hospital as the country’s dirty succession struggle took a nasty turn. The assassination bid was revealed by President Robert Mugabe at the Zanu PF extraordinary Central Committee meeting in Harare on Wednesday where Mnangagwa was confirmed as the country’s first vice president. Insiders privy to the developments said cyanide had been used in the bid to eliminate Mnangagwa who has, for long, battled former vice president Joice Mujuru to be in pole position to succeed Mugabe. Mujuru’s prospects effectively collapsed after she was sacked as vice president on Tuesday and also reduced to an ordinary card-carrying member of Zanu PF. It was claimed that the poison was sprayed in the justice minister office overnight Tuesday in the hope he would walk in Wednesday morning and inhale the substance. However, the minister’s personal assistant got into the office first and is now battling for her life at Harare’s Parirenyatwa Hospital. Unconfirmed reports suggested police had cordoned off Mnangagwa’s office Wednesday evening as part of investigations into the alleged assassination attempt. Said Mugabe: “But why do this?

“You were hoping that it will go for Mnangagwa; oh shame it went for this poor girl, his secretary. Mnangagwa’s secretary was badly affected by the attempted poisoning and was taken to hospital. “We have demanded a probe on the issue and we are not going to allow it to go like that. They thought that Mnangagwa would be the first to go in and be attacked, unfortunately it had to be this poor girl, why do such things for power.” Mugabe seemed to infer that the Mujuru faction, which is now referred to as the “counter revolutionary and quisling cabal”, was behind the attempted attack his newly appointed deputy. In the run-up to last week’s Zanu PF congress, the public media revealed sensational details of a plot to assassinate 90-year-old Mugabe who has been in power since the country gained majority rule from Britain 34 years ago. The plot, according to the reports, involved Mujuru, expelled party spokesperson Rugare Gumbo as well sacked cabinet ministers Didymus Mutasa (Presidential Affairs) and Nicholas Goche (Labour). Mujuru is accused of working with western powers and the opposition in Zimbabwe to further the much vilified “regime change agenda”. The former VP and Gumbo have strenuously denied the accusation and instead claimed Mugabe is being misinformed by a coterie of hangers on connected to the faction led by Mnangagwa. They insist that the former guerrilla movement has been infiltrated by a group of “gay gangsters working to destroy the party from within”. *Source Allafrica/]]>