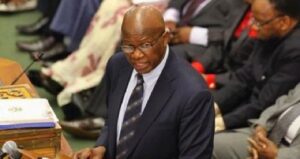 PATRICK CHINAMASA, ZIMBABWE’S FINANCE MINISTER. PHOTO©REUTERS[/caption] Zimbabwe has received a $108 million grant from the African Development Bank (AfDB) to improve electricity and water supplies in the country, the finance minister said on Wednesday. Finance Minister, Patrick Chinamasa said the money would be used to repair the Kariba Dam, which generates most of the country’s power, and to fix electricity transmission lines. Water supplies in the second largest city Bulawayo and a smaller town would also be improved. “I am very pleased that this assistance has come at the right time. “Infrastructure is critical and a priority in the resuscitation of our economy,” Chinamasa told reporters. The southern African country owes foreign creditors like the AfDB, World Bank and International Monetary Fund, $9 billion, which has prevented it from accessing fresh loans required to rebuild roads, schools and hospitals. Zimbabwe is projected to spend 81 percent of its national budget on salaries for state workers next year, leaving little to develop infrastructure. *Source theafricareport]]>