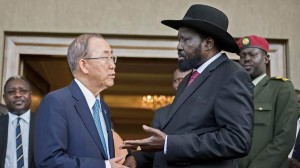 UN Secretary General Ban Ki-moon (L) talks with South Sudan’s President Salva Kiir (R) in Juba on May 6, 2014 (AAP)[/caption] There have been persistent report! s in South Sudanese and regional media alleging that the United Nations has a plan to place the Republic of South Sudan under a “protectorate.” Members of the Government of South Sudan have also brought these reports to the attention of the leadership of UNMISS and voiced their concern. Addressing this issue, on 1 December, the Spokesperson of United Nations Secretary-General Ban Ki Moon made the following remarks at a press briefing in New York: “I can tell you that these reports are completely false. The Secretary-General wishes to make it categorically clear that neither he nor the UN Mission in South Sudan is aware of any plans or discussions within the United Nations to take such a course of action. The UN has supported the cause of self-determination for South Sudan from the time of the 2005 Comprehensive Peace Agreement through to the 2011 referendum and independence. None of this would have been possible without the help of the United Nations.” The Special Representative of the Secretary-General, Ellen Margrethe Lo ej, has echoed the remarks of the Secretary-General’s Spokesperson and confirmed that UNMISS is not aware of nor is it involved in any plans or discussions within the United Nations to take such a course of action. “The Republic of South Sudan is an independent, sovereign State recognized by the United Nations, and is a member of the Organization,” said Special Representative Loej. “The United Nations has no tradition of making independent, sovereign countries protectorates. The principles of South Sudan’s sovereignty and independence are consistently underlined by the Security Council in its resolutions on the mandate of UNMISS.” *Source APO]]>