Mukono (Uganda) (AFP) – On a sprawling, lush cocoa plantation in Mukono outside the Ugandan capital Kampala, farmers have been sampling chocolate for the first time ever. 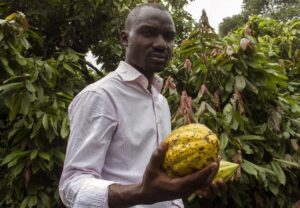 Stephen Sembuya, co-founder of the Pink Food Industries, holds two pods of cocoa at a in Wakiso on November 21, 2014 (AFP Photo/Isaac Kasamani)[/caption]

“When we gave our farm manager the first product to taste his face was so amazing, he was saying ‘really this is coming out from what we are doing?'” said Felix Okuye, 28, the executive director and co-founder of startup Pink Food Industries.

“The taste of the chocolate and the taste that is familiar to him with the cocoa from the pods is two different things. The foreigners have a higher affinity with a bit of bitter chocolate, whereas Ugandans seem to have a sweet tooth.”

In the east African nation, chocolate is a luxury product bought by people in the medium and upper income bracket.

“When you were growing up and you had a parent or relative going out of the country, you would always tell them ‘you bring me chocolate’,” Pink Foods CEO and co-founder Stephen Sembuya, 28, told AFP.

The chocolate on the shelves of Kampala’s major supermarkets is usually from Switzerland, Belgium, Brazil, Malaysia and Turkey. A 100g bar normally sells for about 20,000 shillings ($7.25, 5.90 euros), according to the entrepreneur.

However since May this year, the pair have been selling their own “Uganda” brand of chocolate, mainly through social media, to Kampala restaurants and hotels who use it for deserts, pastries and in ice-cream.

The duo, friends since age eight, are happy with the local reception to their products. But they were “amazed” when they began receiving orders for both cocoa beans and butter from a Swiss factory about two months ago. 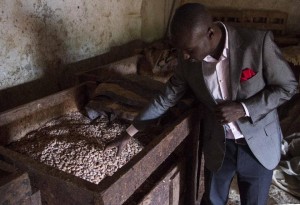 “We realised that what we were doing is not as ordinary as maybe we thought it was,” said Okuye, adding they’ve also sold to South Africa, Kenya, Egypt, Indonesia, Malaysia, Turkey and Britain.

A businessman in Ghana, the world’s second-largest cocoa exporter, has also been lapping up their treats.

“People are eager to know this kind of chocolate coming from Uganda,” said Okuye, adding their products were “more organic” than most chocolate as they had a higher cocoa content.

“Ghana’s interest was so amazing, they were asking even to be agents.”

Uganda is said to have about 20,000 hectares (50,000 acres) of land under cocoa cultivation, mostly in the country’s west and centre, but its fortunes in the industry have fluctuated over time as the government has focused more on coffee.

The cocoa used in Pink Foods’ chocolate is grown by over 100 farmers on a 286 hectare plantation in Mukono, situated about 20 kilometres (12 miles) from Kampala, which is owned by Sembuya’s family and is the biggest single-owned estate in Africa.

The farmers’ efforts amount to the production of 10 kilograms or 400 bars of chocolate per day.

“Cocoa is very, very expensive to process,” said Sembuya. “The would-be financing institutions, mainly the commercial banks, understand one thing: a business with a history, not a business that is starting.” 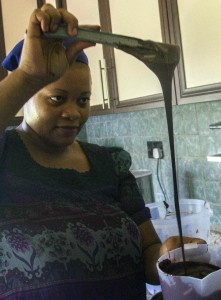 But some funding has come in, and they hope their product will hit the shelves of Kampala’s main supermarkets in May.

“Our plan is for the price to come down when we go to large production,” said Sembuya, a local councillor and human resources graduate.

He said the entrepreneurs would have to work hard to break a “psychological barrier” relating to preconceived ideas Ugandans had about “good chocolate” coming from overseas.

“You’ve got to be ready to give it a long-term or medium to long-term outlook,” said Ocici. ” But once they know how good a local product is they are on your side.”