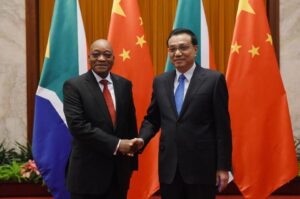 China is South Africa’s largest trading partner and the two are members of the BRICS association of major emerging economies, along with Brazil, Russia and India.

Bilateral trade rose by 32 percent last year to 270 billion rand ($24 billion), heavily weighted in China’s favor. South Africa imports manufactured goods from China, while the vast majority of its exports to China were raw materials. South Africa has also been a reliable diplomatic ally for China in Africa, controversially barring from the country this year Nobel Peace Prize winner the Dalai Lama, despised by China for his advocacy for Tibetan rights. That sparked his fellow laureates to suspend plans for a meeting in South Africa, with the 1984 winner retired archbishop Desmond Tutu accusing the government of “kowtowing to the Chinese.” At their meeting, Li praised Zuma for his commitment to the bilateral relationship.

“I believe that your visit this time will inject new impetus into China-South Africa ties,” Zuma said. He was accompanied by seven Cabinet members, including the finance, trade and transport ministers.