JOHANNESBURG (AP) — Friends and family of Nelson Mandela laid wreaths Friday at a bronze statue of the late statesman to mark the anniversary of his death. Mandela’s widow, Graca Machel, recalled the former president’s last moments, saying he was at peace and surrounded by family. Mandela died last Dec. 5 after a long illness at the age of 95. “My singular privilege was to be the shoulder he would lean on in the sunset of his life,” said Machel. Mandela spent 27 years in prison under South Africa’s segregationist apartheid regime. As international awareness of South Africa’s racial discrimination grew, Mandela became one of the world’s most famous prisoners. After his release in 1990, Mandela went on to win the presidency in the country’s first all-race election in 1994. He was awarded the Nobel prize, along with former South African President Frederick W. de Klerk, for negotiating the end of white minority rule. Mandela served a single five-year term and stepped down voluntarily to focus on charity work. Though apartheid is in the distant past, racial disparities and injustices remain. Machel said South Africans should continue to work for greater racial and ethnic reconciliation to honor Mandela’s legacy. [caption id="attachment_14558" align="alignleft" width="570"] 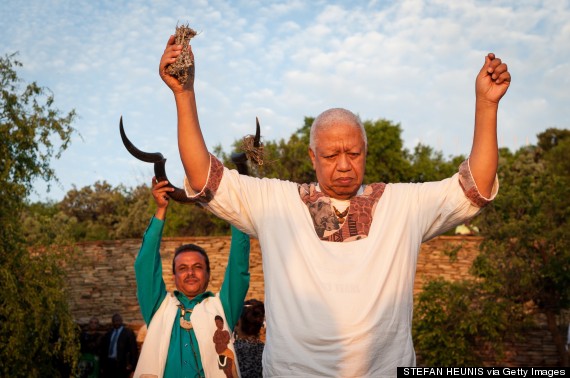 Members of the Khoe and San tribe pray for late President Nelson Mandela in an inter-faith prayer service ceremony held at Isivivane at Freedom Park on Dec. 5, 2014 in Pretoria, South Africa. (STEFAN HEUNIS/AFP/Getty Images)[/caption] Ahmed Kathrada, Mandela’s close friend who was imprisoned with him for more than two decades, described him as “a peasant, an aristocrat. He was a democrat with a touch of the autocrat.” [caption id="attachment_14559" align="alignright" width="570"] 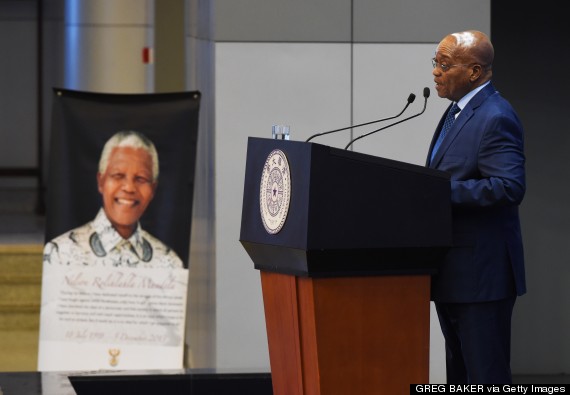 South African President Jacob Zuma makes a speech on the anniversary of Mandela’s death, at Tsinghua University in Beijing on Dec. 5, 2014. (GREG BAKER/AFP/Getty Images)[/caption] U.S. President Barack Obama and wife Michelle said that the world lost a leader one year ago “whose struggle and sacrifices inspired us to stand up for our fundamental principles, whose example reminded us of the enduring need for compassion, understanding, and reconciliation, and whose vision saw the promise of a better world.” *Source huffingtonpost]]>