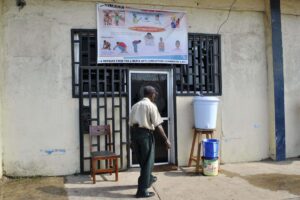 A security guard walks in front of a hand-washing facility at the entrance of a Liberian anti-corruption commission in Monrovia December 9, 2014. (REUTERS/James Giahyue)[/caption] FREETOWN (Reuters) – Sierra Leone’s leading doctor died of Ebola on Thursday, hours after the arrival in the country of an experimental drug that could have been used to treat him, the government’s chief medical officer said.

The drug, ZMab, was transported in frozen form on a Brussels Airlines flight that arrived overnight. Before it could thaw, Willoughby’s condition deteriorated, said chief medical officer Brima Kargbo.

His death brings to 12 the number of Sierra Leone doctors to have contracted the virus. Eleven have died. In all, 142 health workers have been infected with the disease in the West African country and 109 have died, according to World Health Organization figures.

Sierra Leone, neighboring Guinea and Liberia are at the heart of the world’s worst recorded outbreak of Ebola. Rates of infection are rising fastest in Sierra Leone, which now accounts for more than half of the 18,603 confirmed cases of the virus.

The overall death toll from the epidemic has risen to 6,915 as of Dec. 14, the WHO said on Wednesday, adding that the increase in cases in Sierra Leone appeared to have slowed.

Kargbo said Willoughby’s death was one of the most tragic to hit the country since the passing, in July, of its only virologist and Ebola specialist, Dr Shek Humar Khan.

“We all looked up to Dr Willoughby and would consult him on many issues relating to our medical profession,” Kargbo said. 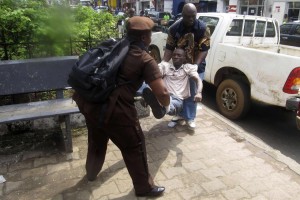 A sick man is carried away to be tested for Ebola after collapsing on a street in Monrovia December 9, 2014. (REUTERS/James Giahyue)[/caption]

Ebola centers in Sierra Leone overflowed on Wednesday as health workers combed the streets of the capital Freetown for patients, after the government launched a major operation to contain the epidemic.

“We’ve lost personal friends and colleagues we’ve worked with. It’s extremely depressing and frustrating. You can talk to someone today and tomorrow they are Ebola-infected,” he said.

“The tension, the depression, it’s a lot of pressure. You start having nightmares because of Ebola.”