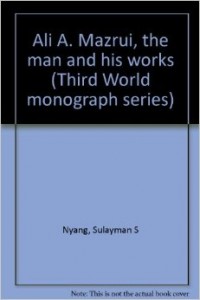 Finally, in writing the fifth point in this narrative about the man and his works, let us go back to the evolution of Professor Ali A. Mazrui. From Mombasa to Manchester to Columbia to Oxford and to Kampala, Ali has many numerous stops on the way to fame and glory. . This cultural and physical geography of Ali’s journey to a homeland other than his own Kenya has been the bone of debates among his colleagues and ideological foes. During the Cold War, Ali as a person was deeply wedded to the West and for this and other related reasons, three groups have been at logger-heads against Ali. One is the ideologically motivated African socialist. His strong opposition to African dictatorship was evident in his earlier writings. Much has been said about his characterization of Kwame Nkrumah as a “Leninist Czar.”  However some of his critics in his latter days were disturbed by his relationship with men like Muammar Gaddafi of Libya and Robert Mugabe of Zimbabwe.  The second groups against Ali were theoretically motivated. In their view, Ali was a traditional scholar who was somehow allergic to statistical data and mathematical calculation as it is now celebrated among the behaviorists. The third and final groups against Ali were politically and religiously inspired. These were either Zionist element who despised his association with the Arab/Palestinian cause and were determined to challenge and if possible humiliate him. As I have stated elsewhere, Professor Mazrui had the nerve and the verve to confront his foes. His pugilistic skills led one of our colleagues over thirty years ago to project him as the Muhammad Ali among African scholars.   . *Prof Sulayman S. Nyang is a professor and former chairman of the African Studies Department at Howard University in Washington, D.C]]>