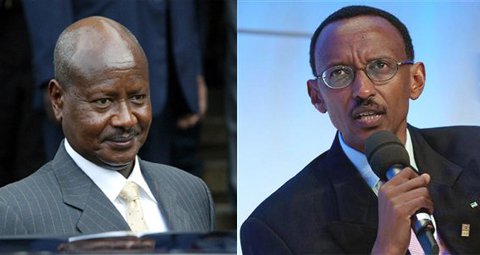 President Yoweri Museveni, Uganda (L) President Paul Kagame, Rwanda (R)[/caption] The game of thrones and succession planning in Africa was jolted by the spectacle on 31 October of Burkina Faso’s President Blaise Compaoré fleeing the mass street demonstrations in Ouagadougou on a French helicopter for exile in neighbouring Côte d’Ivoire. Whether or not those demonstrations were part of a fiendish military plot, as Compoaré now claims, the popular anger against his plans to change the constitution and secure a third – in reality a fifth – term in power was clear across the country.

The bigger question is why a seasoned political operator such as Compaoré failed to read the national mood, even after many of his allies defected to the opposition. How significant the chasing of Compaoré from power might prove will depend partly on the success or other- wise of Burkina’s transition. Should the army imitate the tactics of its counterparts in Mali or Guinea, the ‘méthode Burkinabée’ could fast lose its appeal. But in the short term Africa’s oppositionists are celebrating the dramatic failure of another third-term plan from a sitting president. Among the first was Vital Kamerhe, a former colleague of President Joseph Kabila who opposes Kabila’s plan to extend his tenure in power in the DRC. Kamerhe tweeted congratulations to Burkinabé activists as Compaoré fell. The message to Kabila, who had already been advised by US secretary of state John Kerry not to change the constitution, was clear. Next door in Burundi, President Pierre Nkurunziza says he does not need to change the rules to run for another term in elections due in June 2015. In Togo, civic activists and oppositionists are calling for constitutional reforms that would block President Faure Gnassingbé from running for a third term in March. Although politicians and activists recently blocked sitting presidents in Mozambique, Malawi and Namibia from staying on, the mobilisation of protesters against Compaoré’s self-succession plan is concentrating minds in other presidential palaces. This was one of the biggest public protests in 25 years: an estimated 100,000 took to the streets of Ougadougou while the second city of Bobo-Dioulasso was declared an opposition stronghold. A quarter century ago the fall of the Berlin wall inspired an earlier wave of reform fervour. Francophone states – from Mali to Gabon – held national conferences to reform constitutions and protect basic rights. Leaders in Anglophone states such as Ghana, Kenya and Tanzania quietly legitimised multiparty systems but kept the great political advantage with the incumbent. Over the past two decades, opposition parties have sharpened their tactics, winning important victories in Ghana, Kenya and Senegal. But the question of succession and personal rule remains a blot on the landscape. Zimbabwe stands as an extreme case: the battle to succeed Robert Mugabe after 34 years in power has strangled the economy and paralysed politics. First, the popular but tactically inept Movement for Democratic Change challenged Mugabe at the ballot box. Now his own party is divided over the choice of his successor between vice-president Joice Mujuru and justice minister Emmerson Mnangagwa. To complicate matters, Mugabe despatched his wife Grace onto the campaign trail to raise the prospects of her own interest in the succession and traduce Mujuru. Presidential rule does not get much more personal than that. Neither do the barbs against Mugabe’s wife, commonly known as ‘Dis-Grace’ or ‘The First Shopper.’ Few leaders, however, combine 90-year-old Mugabe’s stamina and resilience. So activists may calculate that some of the shakier but still aspiring third-termers – such as Kinshasa’s Kabila, Brazzaville’s Denis Sassou Nguesso and Benin’s Thomas Yayi Boni – might change their plans with some encouragement from the streets. Such sentiments are much rarer in Kampala and Kigali, where those former guerrilla leaders Yoweri Museveni and Paul Kagame, have brought all the ruthlessness of a military campaign to their strategies to extend their tenure in office. Even in Kampala, oppositionists are claiming that Museveni will leave office only for his son. In neighbouring Kenya, electoral politics is dominated by President Uhuru Kenyatta and vice-president Raila Odinga, the sons, respectively, of the country’s first elected president and the opposition leader at independence. Some habits are hard to break. ●
*Source theafricareport
]]>