Investors targeting Africa are looking east as an oil-market rout depresses economic growth prospects in Nigeria and other crude-producing nations. 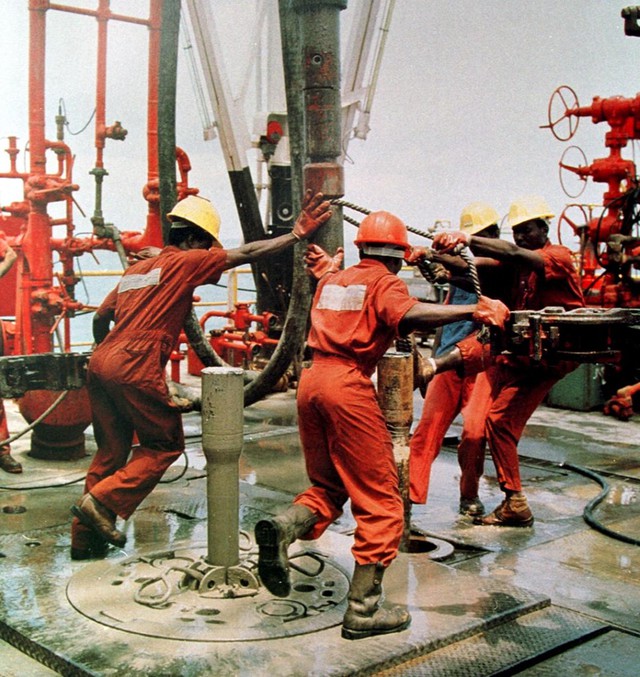 Men work on an oil rig in Nigeria. Photographer: Stringer/AFP via Getty Images[/caption] Stocks have surged 22 percent in Tanzania, 18 percent in Uganda and 9.4 percent in Kenya (NSEASI) since oil began falling from a peak of $115.71 a barrel on June 19. Lower fuel-import costs are helping to keep inflation and interest rates in check and bolster their economies. That contrasts with a 24 percent slump in the benchmark stock index in Nigeria, which relies on oil for 95 percent of foreign-exchange income and faces political instability ahead of elections in February. “It’s mostly the east African countries that will benefit from the lower oil price,” Joseph Rohm, a fund manager who helps oversee Cape Town-based Investec Asset Management’s $2 billion Africa fund, said by phone on Dec. 2. “Lower inflation implies lower interest rates for longer, which is good for consumers. Low rates are also good for credit growth, which is good for the banks. Kenya is one area where we have increased our exposure.” Oil exporters such as Nigeria, Angola and Ghana, which are on Africa’s west coast, have been left exposed to financial market turmoil after a 42 percent plunge in the price of Brent crude in the past six months. Authorities were slow to build adequate savings and reduce the reliance on oil earnings to fund their budgets when crude prices soared, putting their economies now at risk.

Nigeria’s naira has slumped 10 percent against the dollar since June 19, the most of 24 African currencies tracked by Bloomberg after Malawi’s kwacha, to trade at 179.99 as of 4:27 p.m. in Lagos. The Kenyan shilling has slid 3.5 percent, while Tanzania’s currency has dropped 3.2 percent and Uganda’s 6.2 percent. “A sharp divide is opening up in financial markets between oil-exporting countries and importing ones,” Nicholas Spiro, managing director of Spiro Sovereign Strategy, said in an e-mailed response to questions, on Dec. 10. “It’s not all about oil. There’s a plethora of domestic and external factors that have a strong bearing on the creditworthiness and risk perceptions.” Capital Economics, based in London, estimates that Nigeria’s current-account surplus of 3.5 percent of gross domestic product may reverse to a deficit of a similar magnitude next year, while Angola’s surplus of 4 percent could turn into a shortfall of 14 percent.

Despite a lack of oil wealth, economic expansion in East Africa has been resilient. The International Monetary Fund is forecasting GDP growth of 7 percent next year in Tanzania (DARSDSEI), 6.3 percent in Uganda and 6.2 percent in Kenya. Nigeria’s Finance Ministry on Dec. 10 cut its growth forecast by 1 percentage point to 5.3 percent, while Capital Economics estimates Angola’s economy will contract about 2 percent. “There is a lot more positivity around non-commodity led growth in East African markets versus more commodity-led growth in the west,” Peter Attard Montalto, an emerging-markets economist at Nomura International Plc in London, said in an e-mailed response to questions. Still, the favoritism toward East Africa may be “overdone” given the bigger market size in West Africa, he said. While lower crude prices present a possible threat to Kenya and Uganda as they move toward becoming oil exporters, exploration projects have been onshore and thus will be cheaper to tap than offshore finds.

Tullow Oil Plc (TLW), based in London, will prioritize onshore exploration in Kenya over deep-water projects, Chief Executive Officer Aidan Heavey said on Nov. 5. The company, whose shares have plunged 56 percent in London since the beginning of June, has been able to reduce drilling costs in Kenya to $7 million per well from $50 million as exploration has progressed, he said. Nigeria has lost its appeal with investors even though it has Africa’s largest economy and its population of 170 million is almost a third bigger than the combined population of Tanzania, Kenya and Uganda. Political instability is worsening amid an escalation of attacks by Boko Haram Islamist militants, who have killed more than 13,000 people in the past five years, according to the government. Two explosions hit a market in the city of Jos in central Nigeria yesterday, killing at least 16 people. It was the second time the market was targeted after a twin bomb attack in May killed more than 100 people.

“There is a lot of optimism around East Africa,” Thomas Hansen, an Africa analyst at Control Risks, said in a Dec. 5 interview in Cape Town. While Kenyan authorities are also struggling to contain attacks by Somalia’s al-Qaeda-linked militant group, al-Shabaab, “the violence doesn’t appear to be enough to drive away investment.”