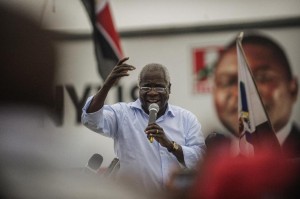 The move on Wednesday was seen as an olive branch to the former rebel commander to avoid further conflict in the resource-rich country.

But Dhlakama has rejected the law, which would see a British-style leader of the opposition get his own official residence, staff and office, as well as the right to set his own salary.

Over $2 million (1.6 million euros) has been set aside for the new post in the 2015 budget, the finance ministry said, which also comes with a diplomatic passport.

Dhlakama lost the presidential election to the ruling Frelimo party’s Filipe Nyusi, although he disputes the result, which the country’s constitutional court has yet to confirm.

The veteran leader has lost every election since the end of Mozambique’s 16-year civil war in 1992 which pitted his anti-communist guerillas against the Frelimo movement, who have ruled the country since independence in 1975.

Parliament approved the creation of the opposition leader post on December 3 and it will apply to all future runners-up in elections.

But Dhlakama claimed his old enemies were trying to appease him after he rejected the outcome of the October 15 vote and called for the creation of a “caretaker government”. “Why do they offer me this now? To bribe me? To silence me?” he was quoted as saying last month by the Mozambican News Agency (AIM) while the bill was being debated in parliament. According to the official results, Dhlakama took 37 percent of the vote in the presidential poll, 20 points behind Nyusi, who is due to take office in February. While Dhlakama said the election was not free and fair, he said he was prepared to negotiate a unity government for the sake of democracy.

The constitutional court is due to rule on the elections in the next few days. The result has already been approved by the country’s electoral commission.

Mozambique is seen as one of Africa’s rising economic stars, with huge coal and gas reserves.