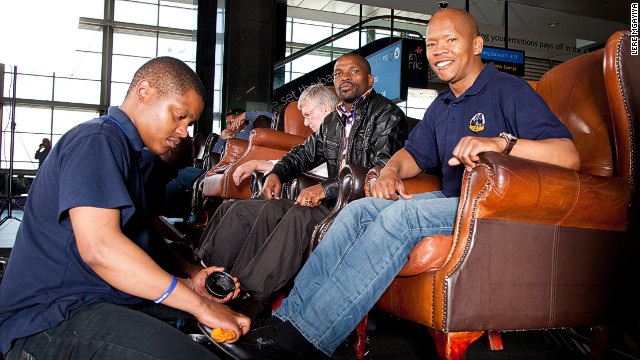 Lere Mgayiya (right) had a rough first day in business with just basic chairs and no pedestals for his customers. Now his business offers clients plush leather armchairs to relax in whilst getting their shoes shined.[/caption] Suede slip-ons, elegant high-heels or lace-up brogues — whatever shoes you wear in an important business meeting you want to look your shiny best. Some people apply polish with a brush and others choose a cloth, while those coming from afar often leave the task to the capable hands of craftsmen who can make travel-worn footwear look like brand new.

If someone has shined your shoes in a South African airport, it’s probably thanks to Lere Mgayiya.

“We’re the biggest shoe-shine company in Africa,” he explains without sounding arrogant. “In Johannesburg we shine about 350 pairs of shoes a day, and about 120 pairs in Cape Town and another 120 in Durban.” In total, Lere’s Shoe Shine business has 45 employees across the three major airports, and the boss is now eyeing partnerships in America and UK, as well as expansion across Africa.

But things weren’t always on such a sure footing for Mgayiya. The resourceful South African had to go through a string of failures to get to where he is today — a spectacular entrepreneurial journey of risk, belief and reward.

Long before becoming South Africa’s shoe shining king, Mgayiya started his professional career distributing boarding cards for South African Airways. But after five years with the airline and a promotion to supervisor, Mgayiya was made redundant. “I wasn’t ready to leave,” he recalls. “If the truth be told, I was afraid — it gave me a push.”

Mgayiya stopped handling paper and joined the family livestock transportation business. “I enjoyed being out and about,” he says, while explaining his role negotiating with farmers. “I enjoyed setting my own goals and achieving them.”

But life in a family business wasn’t all plain-sailing. When Mgayiya suggested taking a loan and securing exclusive contracts, his uncle asked him to move on. After a year, he was jobless again.

His mother’s brother took away his job, but Mgayiya kept in contact with his farmer clients and soon embarked on his next project: selling the farmers’ eggs to the kitchen of the South African parliament. Making just $6 profit per egg box, this however was not a lucrative operation. “I fell behind with payments to farmers,” he remembers. “I didn’t have money to start my car. You need big pockets to run a supply business.”

When his chips were down, Mgayiya stayed optimistic and entered the Sandlam Money Game — a TV competition for entrepreneurs. Marketing execs at Red Bull liked his advertising idea, and Mgayiya won the game. “I got 35,000 Rand ($3,100) in two days,” he says. “It was great.”

He took that money and invested it all in a tree-planting company which he then started working for. But six months later things went sour, and Mgayiya was penniless again and back at square one. 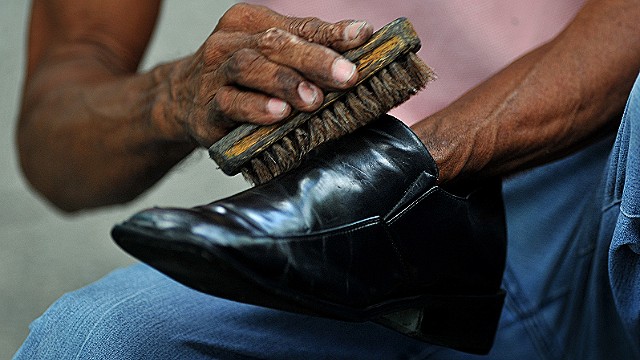 When he started shining shoes, Mgayiya had no experience. He often slipped and got polish on his customers’ socks which upset people.[/caption]

Mgayiya had already experienced hard times, but the year to come was to test his resolve. “I needed a steady income, so I decided on a shoe-shining business at Cape Town airport. A hungry man can’t think, and I was starving.”

He got in touch with his contacts from his airline days and applied for the business space in November 2002. The authorities took until September 2003 to give him the go ahead. “In that year I sold my car…I worked as a receptionist for three months. I begged and borrowed just to make ends meet.”

Before he could start shining shoes, Mgayiya pawned his fridge to buy business equipment. But on his first day Mgayiya and his sole employee arrived to bad news. “The supplier I had paid to provide pedestals failed to deliver,” Mgayiya remembers. “I polished shoes in my lap.”

In the beginning, both staff members worked flat out 5am to 9pm every day of the week except Sunday. “I left the house before my family woke up, and only got home after my young daughter had gone to sleep,” he recalls. “It was tough.”

But customer numbers soon got a boost after a client suggested that the business name should highlight the personal, chatty aspect of the business. “Airport Shoeshine” became “Lere’s Shoe Shine,” and people liked it — after just four months. the team had grown to five and business was booming. 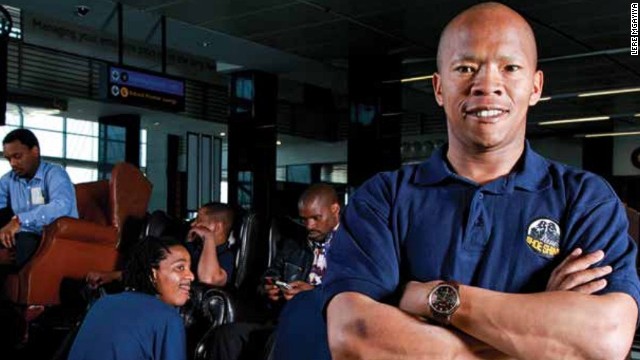 Mgayiya can afford to smile now that has business is seeing success, but he has known failure in the past when he was fired from South African Airways and then lost his investment in a tree-planting company.[/caption]

Success in Cape Town didn’t cool Mgayiya’s ambition, and after a year he got a chance to pitch to the person in charge of all South African airports. She liked his idea, and expansion started soon after. At its height, the company had 60 employees in five airports across the country. Today, Mgayiya has scaled back to the three major ones: Cape Town, Durban and Johannesburg.

“I have my own house and send my daughter to private school,” he beams. “And I could afford to get married — a proper marriage.” He no longer works from 5am to 9pm either. “I just do the one shift from 12,” he says, laughing. “The family loved that one.”

“When starting a business in South Africa, you need self-belief,” is his top advice for young entrepreneurs. “All the conditions will never all be favorable at the same time. If you don’t start, you won’t go anywhere — you have to start.”

While he’s under way now, Mgayiya shows no signs of stopping. He has his eyes on Angola, Kenya and Nigeria for expansion, as well as partnerships in U.K. and America. His shine for business may have emerged from a number of failures, but this entrepreneur shows how smudges and setbacks shouldn’t get in the way of success.