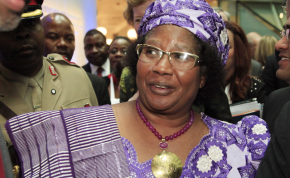 Photo: Marisol Grandon/DFID
Former President of Malawi Joyce Banda.[/caption] The Anti-Corruption Bureau (ACB) on Tuesday issued warrant of arrest for former Malawi president Joyce Banda. Reports reaching Malawi24 indicate that the warrant of arrest has been issued following evidence compiled from the Close Circuit Television (CCTV) footage of the meeting Joyce Banda had with that the government submitted to the graft bursting body Government’s submitted the footage to ACB barely a week after Cashgate Chief suspect, Oswald Lutepo implicated Banda on Zodiak Broadcasting Station (ZBS) in the Cashgate scandal, saying the former Head of State was the “main beneficiary” of the money he reportedly stole from Government, saying the former president played conduit to the cashgate scandal. In an interview with Zodiak Broadcasting Station on Friday, November 21, 2014, Lutepo, who is answering theft and money laundering charges related to the cashgate scandal, alleged he was working on instruction from the former President to defraud government.

“[Joyce Banda] used my account as a conduit. I have been to State House several times to deliver the money. If there are CCTVs at the state residences, they will prove me right,” said Lutepo. In an interview with Malawi24, ACB Public Relation officer, Egrita Ndala, could neither confirm nor deny the allegation that a warrant of arrest has been issued for Joyce Banda. “We are on strike and that if the warrant has been issued then I am yet to see it. It will need me to consult my bosses to give information but otherwise I cannot since we striking andmy friends might stone me if am giving information to the media as that will amount to working while we are on strike. I cannot comment any further” said Ndala. Currently the ACB has entered the third day of strike and has warned not to continue investigating on the cashgate cases if government does not give them the 70% pay rise. *Source allafrica/Malawi 24]]>