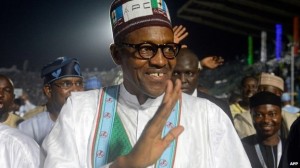 Nigeria’s former military ruler Muhammadu Buhari, 71, is not a quitter[/caption]

Nigeria’s former military ruler Muhammadu Buhari, 71, is not a quitter

Defeated in the last three elections, he has returned to contest the highest office. Mr Buhari will face incumbent President Goodluck Jonathan, who is from the southern Niger Delta region, for a second time at the polls in February. It looks set to be a close race as on this occasion the Muslim northerner has been chosen as the candidate for the All Progressives Congress (APC) party, formed last year after four opposition parties merged. The APC has also been attracting heavyweight defectors from the People’s Democratic Party (PDP), which has dominated the political scene since the end of military rule in 1999. Mr Buhari has always been popular among the poor of the north (known as the “talakawa” in the north’s Hausa language). Now some feel his military background and his disciplinarian credentials are just what the whole country needs to get to grips with the Islamist insurgency in the north. A Muslim from Daura in Katsina State, who has given his support to Sharia in the north, Mr Buhari has previously had to deny allegations that he has a radical Islamist agenda. This proved a problem for him in the 2003 polls – he failed to secure much support among Christians in the south, where he was viewed with some suspicion. But having escaped an attack on his convoy in Kaduna in July, which bore all the hallmarks of a Boko Haram assassination attempt, he has promised to end the insurgency within months if elected. He has blamed President Jonathan’s weakness for its escalation and has refused overtures to participate in talks with the radical militant group. [caption id="attachment_14755" align="alignright" width="300"] 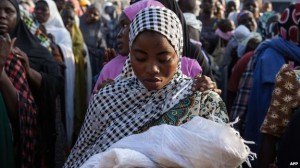 More than three million people have been displaced in the north-east during the five-year Islamist insurgency[/caption] His tough stance as a military commander in 1983 – when some Nigerian islands were annexed in Lake Chad by Chadian soldiers – is still remembered in the north-east, now the militants’ stronghold, after he blockaded the area and drove off the invaders. ‘War Against Indiscipline’ He ruled Nigeria from January 1984 until August 1985, taking charge after a military coup in December 1983. It is a period remembered for a strict campaign against indiscipline and corruption, and for its human rights abuses.
Muhammadu Buhari in focus:
The verdict on Mr Buhari’s 20 months as Nigeria’s leader is mixed. About 500 politicians, officials and businessmen were jailed as part of a campaign against waste and corruption.

Some saw this as the heavy-handed repression of military rule.

But others remember it as a praiseworthy attempt to fight the endemic graft that prevented Nigeria’s development. [caption id="attachment_14756" align="alignleft" width="300"]

Will the former general get the kiss of approval in February – his fourth attempt to win at the ballot box?[/caption] He retains a rare reputation for honesty among Nigeria’s politicians, both military and civilian, largely because of this campaign. As part of his “War Against Indiscipline”, he ordered Nigerians to form neat queues at bus stops, under the sharp eyes of whip-wielding soldiers. Civil servants who were late for work were publicly humiliated by being forced to do frog jumps. He also introduced a notorious decree to restrict press freedom, under which two journalists were jailed. However, his attempts to re-balance public finances by curbing imports led to many job losses and the closure of businesses. As part of anti-corruption measures, he also ordered that the currency be replaced – the colour of the naira notes were changed – forcing all holders of old notes to exchange them at banks within a limited period. Prices rose while living standards fell, leading to a palace coup by Gen Ibrahim Babangida on 27 August 1985. Mr Buhari was imprisoned for 40 months. Mr Babangida wanted to speed up the restoration of civilian rule, which Mr Buhari did not see as a priority. ‘Up to the people’ Mr Buhari has continued to defend his military coup of 31 December 1983. “It is up to the people. If you choose correct leadership, there won’t be any need for the military regime. “The military came in when it was absolutely necessary and the elected people had failed the country,” he said in October 2005. [caption id="attachment_14757" align="alignright" width="300"] 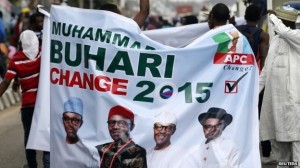 The opposition has united this time to back one candidate to challenge the PDP in the presidential pol[/caption] When former President Olusegun Obasanjo was a military ruler in the 1970s, Mr Buhari held the key post of minister of petroleum affairs. But the relationship between the former colleagues cooled as Mr Buhari’s coup ousted a civilian government, led by Alhaji Shehu Shagari, who won elections organised by Mr Obasanjo. This led to continuing questions about Mr Buhari’s commitment to democracy. Relations between the two former generals may now thaw following what seems to be an endorsement for Mr Buhari from Mr Obasanjo in his recently released autobiography. Mr Buhari “would not be a good economic manager”, wrote the politician who won two presidential elections for the PDP after 1999, but “will be a strong, almost inflexible, and a courageous and firm leader”. *Source BBC
]]>