Matthew 13:57: “…only in his hometown and in his own house is a prophet without honor.” 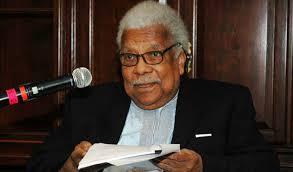 Those familiar with the writings of Mjomba (Uncle) Ali Mazrui know that he loved comparative approaches, drawing out contradictions and paradoxes and generating rich insights in the process. And in a way his own life is an illustration of this stylistic device that he employed so effectively.  Mjomba Ali Mazrui’s life captures the promise and tragedy of our nation—the Kenyan paradox. It is a paradox or contradiction that his death must help us resolve. On the one hand, his achievements represent the excellence of the Kenyan spirit and abilities: a people confident enough to conquer and rule the world. On the other hand, his exile from his home soil represents our discomfort with excellence at home, a penchant to reward the most undeserving and punish the most meriting. A strange habit of making competence a burden in this country! We must stop insecurities that free thinkers seem to stir in us—insecurities that made us deny Mjomba Ali an appointment for public service but after we atoned for our sins by making him Chancellor of the Jomo Kenyatta University of Agriculture and Technology (KUAT), we let him exit yet again without deserving honor. We have punished thought by exiling these free and great thinkers. And these free thinkers have succeeded in shaming us by their sheer excellence in the foreign lands to which we banished them. We rejected the intellectual confidence of Barack Obama Senior and now he has produced the first black American President. We exiled Professor Anyang’ Nyong’o to Mexico, now he has given us the first African Oscar. We exiled Ngugi Wa Thiong’o, now he has been in the top running for the Nobel Peace Prize for Literature.  We exiled Ali Mazrui, a man listed both by Foreign Policy and Prospectus Magazine of the United States and United Kingdom respectively as one of the world’s top 100 most influential thinkers. That is no mean feat even though exiling him was a very mean act. We exiled the eminent and distinguished Professor Yash Pal Ghai to the UK and finally to Hong Kong, recalling him home to write our Constitution only to end up frustrating him in that patriotic duty. Professor Ghai has continued writing and rewriting Constitutions for other nations, a great project that made the Queen honor him with a CBE (we honored him with an EBS but are yet, after two years, to give him the medal)! We exiled Professor Alamin Mazrui after we detained him without trial and he prospered and achieved greatness in the US. We exiled Micere Mugo, a great professor of literature to Syracuse University in New York. We exiled Wangui wa Goro to London since she was in her 20s. We exiled Kamonji Wachiira to Canada where he ended up holding diplomatic and development positions with the Canadian government and Canadian Sida, respectively. We exiled Professor Maina  Kenyatti, the first Kenyan historian to show passionate interest and conduct research on the Mau Mau War of Liberation. We exiled Professor Shadrack Gutto to Zimbabwe and South Africa where he has excelled in matters of constitutions and constitutionalism. We exiled John Samuel Mbiti, a re-known and brilliant philosopher who taught at Makerere and could not get a job at home after Idi Amin came to power in Uganda and his life working in Uganda was in danger.  He now works in Switzerland and continues to write and recently translated the Bible in Greek into the Kikamba national language. We exiled the brilliant historian ES Atieno-Adhiambo to the US where he has distinguished himself as a scholar par excellence. We exiled Professor Makau Mutua who is now a distinguished professor at Buffalo Law School, constantly glorified by the Governor of New York and the Chief Judge of New York. And there are many more great scholars we have exiled! So if there is anything to be learned, it is that our nation’s culture of constant discomfort with excellence, of exiling thought because ideas terrify us, only succeeds in shaming us abroad and costing us dearly at home. The rest of the world benefits from our rejected gems, as we continue to suffer from underdevelopment and poverty and constant attempts to sabotage a promising constitutional democracy. We are only proud of one small and useless idea: that we have perfected the art of ethnic calculus and other divisions in our politics, and elevated corruption as a high science of our nationhood. These are two traditional sins of Africa’s governance that Mjomba Ali spent his lifetime in scholarship and public service fighting. Kenyans have a big spirit; a great potential and an in-built confidence to lead and conquer the world. However, to realize this potential, we must learn to be at ease with excellence and stop punishing and exiling thought. As we wish Mjomba Mazrui to rest in peace in death, may we also learn to live and be at peace with great ideas—and with great thinkers among our women and men! Finally, we all agree that Mjomba Ali was a global African. Born in Mombasa, he was a Kenyan, a native of the continent of Africa, and a global citizen. If we are serious about implementing the 2010 Kenyan Constitution, particularly the provisions on patriotism, nationhood, and unity in diversity (be it ethnic, religious, regional, religious, gender, generation, clan, class), then Mjomba Ali gives us the ideological, political, and cultural template for necessary political leadership to succeed in that endeavor. We need not suffer from the crisis of political leadership anymore. We only need to internalize the virtues of Mjomba Ali in our transformation. I end where I started. The “hometown” and the “house” in this case must both refer to “Kenya” and “Kenyans!” May the Almighty Allah rest Mjomba Ali’s soul in Eternal Peace! Allahu Akbar. *Willy Mutunga is a Kenyan leading scholar and Chief Justice and President of the Supreme Court of Kenya.]]>