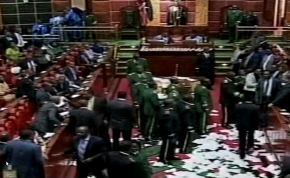 Photo: Capital FM/Screenshot
Chaos has erupted in Kenya’s parliament as the opposition protests against the passing of the Anti-Terror Law.[/caption] The Opposition MPs began by heckling the chairman of the Security Committee Asman Kamama (Tiaty) as he attempted to move the motion on amendments to the Security Laws (Amendment) Bill 2014. MPs led by John Mbadi then grabbed their Order Papers and hurled them to the floor of the House as some belted the popular ‘Bado Mapambano’ (The struggle continues) song, forcing Speaker Justin Muturi to initially adjourn sittings for 30 minutes. An attempt to re-convene proved futile forcing suspension of the session until 2:30pm. Senate Minority Leader Moses Wetangula (Bungoma), Boni Khalwale (Kakamega), Johnson Muthama (Machakos) and James Orengo (Siaya) who had made their way into the Speakers Gallery were forcefully ejected on orders of Muturi. “I direct that the members in the Speakers gallery who are waving must be ejected forthwith. Those are strangers… they must get out! Those strangers must leave the Speakers gallery,” shouted the Speaker amid cheers from the Jubilee wing.

But even before the Sergeant-at-Arms could eject the Senators, a section of Jubilee MPs dashed to the gallery where a fist-fight ensued. In the end, Wetangula’s shirt and Muthama’s trouser were torn. https://www.youtube.com/watch?feature=player_embedded&v=D-f5V1zLuHg#t=9   As the drama unfolded, orderlies surrounded the Mace amid fears it could grabbed by the Opposition MPs following last week’s attempt by Nyando MP, Fred Outa. The Speaker had started by warning MPs against going against the code of conduct set out in the Standing Orders, as this would attract very strict penalties. “Any member who is suspended during this special sitting will automatically relinquish all privileges, immunities, access to parliamentary precincts, attendance of committee sittings and any allowances payable including mileage during the recess period,” cautioned Muturi. And as the legislators staged a revolt, Muturi implored the Sergeant-at-Arms to take note of the members who were ‘misbehaving’ so that appropriate action would be taken against them. *Source allafrica/The Star]]>