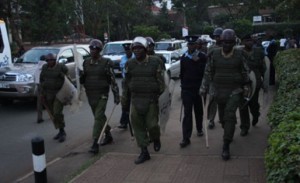 Photo: Capital FM
Police on the spot over Mombasa killings (file photo).[/caption] The government has demanded an apology from Al Jazeera over a report aired on the international TV station on Sunday alleging that the State carries out at least 500 extrajudicial killings every year. On Tuesday, a statement released by Principal Secretary Joseph Tiampati said that the government has also filed a complaint with the Media Council of Kenya concerning the conduct of both local and international journalists following the documentary. “While the makers of the programme claim to have sought the position of the police spokesman, they failed in their report to adequately satisfy the journalistic principles of fairness and accuracy, particularly on such critical matters as the country’s national security,” Tiampati said. https://www.youtube.com/watch?v=hgFoli9GmhY   He said that the report further aims to undermine the government’s efforts to deal with insecurity. In its report, Al Jazeera allegedly interviewed officers Anti-Terrorism Police Unit who confirmed killing controversial Mombasa cleric Abubakar Shariff Ahmed, alias Makaburi, with the assistance of foreign intelligence agencies. One ATPU officer said the orders come from the National Security Council. “It comprises of the President, Deputy President, Chief of the Defence Forces, Inspector General of Police, National Security Intelligence Service Director, Cabinet Secretary of Interior and the Principal Secretary Interior. Any decision is made within that club of people,” the officer said. “Day in, day out, you hear of eliminating suspects. We have the police itself. We have special units like GSU. So not a total, but you can say about almost 500,” the officer added. **Source allafrica/The Star]]>