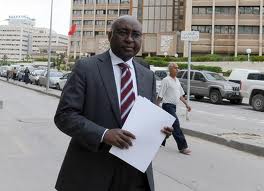 The President of the African Development Bank Group, Donald Kaberuka, received the Forbes Africa Lifetime Achievement Award on Thursday, December 4 during the magazine’s 4th Annual Person of the Year Awards ceremony in Nairobi, Kenya. In a statement delivered on his behalf by Gabriel Negatu, Director of the AfDB’s East Africa Regional Resource Centre, Kaberuka expressed his appreciation for the award, which he dedicated to the 2,000 Bank staff, whom he said, “it is my privilege to lead. “Anything I have achieved in my ten year stint at the helm of this great Bank has been achieved with their unfailing support, skill and dedication.” Kaberuka saluted the leaders present at the evening’s awards, and called on them and others to carry the torch: “As I look back on my time in the service of Africa at the African Development Bank. I know we are winning, but we have not won yet. “Leadership will take us to the goal, and I salute the many of you tonight who are leaders. Your followers constitute the youngest and most dynamic population in the world. Africa has shown that it is a place of immense opportunity for its young people.” Nigerian business man Aliko Dangote received the Forbes Africa Person of the Year Award for 2014. Kaberuka, Nigerian author Chimamanda Ngozi Adichie, South African advocate Thuli Madonsela and Arunma Oteh, Director-General of Nigeria’s Securities and Exchange Commission, were among the high-profile nominees. Kaberuka’s tenure as AfDB President comes to an end with the election of a new Bank President in May 2015.]]>