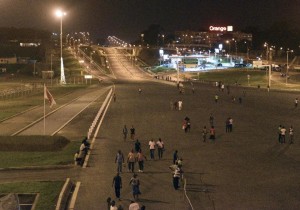 Abidjan (AFP) – Thousands of Ivorian pedestrians and motorists flocked to Abidjan’s new toll bridge on Sunday as the long-awaited crossing, which is expected to boost trade in the world’s top cocoa producer, opened to traffic.

The 1.5 kilometre-long bridge is the third road link across the lagoon in Ivory Coast’s economic capital.

A flagship government project years in the making, it cost 270 million euros ($330 million) to build and links the posh northern suburb of Cocody to Marcory, where the seaside city’s port is located.

It is the first major infrastructure project since the former star French colony was ravaged by a low-lying civil war between 2002 and 2004 that sliced the country in half, wreaked havoc on the economy and dragged Ivory Coast into turmoil for a decade.

“It’s a wonder of Abidjan,” enthused Alexis Kouakou, 34. “It’s the biggest project in Ivory Coast of all time.”

Abidjan, which adjoins the Atlantic Ocean, is built around the Ebrie lagoon. It had only two bridges before and they were badly choked. Traffic in the city centre was often gridlocked as a result.

The third bridge, which is also an expressway, will significantly cut travel time to the port area. Experts say this is important in a city which has a huge hinterland, serving several landlocked countries in west Africa. 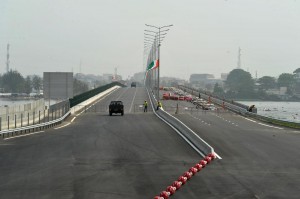 The Henri Konan Bedie bridge is seen prior to its inauguration on December 16, 2014, in Abidjan, Ivory Coast (AFP Photo/Sia Kambou)[/caption]

He defended having a toll bridge in a country where the vast majority of the population is poor, saying the savings in petrol costs thanks to a shorter and more fluid route would more than offset the costs.

The bridge, named after former Ivorian president Henri Konan Bedie, who is popularly referred to by his initials, will be free until January 1.

The project was partly financed by the Africa Finance Corporation (AFC), a Nigeria-based fund which aims to finance infrastructure projects in Africa.

But Achi’s defence notwithstanding, many said the bridge would be unaffordable to most.

A motorist using the bridge for round trips would have to shell out 1,500 CFA francs (2.3 euros) a day, which would total to 45,000 CFA francs or 69 euros a month, said fashion designer Evra Besseko.

“And that is out of reach for many people,” Besseko said