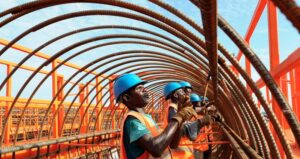 China Eximbank has loaned Ivory Coast around 466 billion CFA francs ($875 million) for the construction of a second container terminal at Abidjan port, the director general of the port said on Monday. Ivory Coast plans to increase capacity at the port in its economic capital Abidjan, one of the busiest in Africa. The port serves as a gateway for landlocked nations to the north and a transit point for beans from the world’s top cocoa grower. “The total cost of the project is about 466 billion CFA francs,” Hien Yacouba Sie told a news conference. “The financing has been concluded with China Eximbank,” Sie said, adding that construction would include the enlargement of the Vridi canal, the construction of the second container terminal and a roll on/roll off terminal. He said construction would start in the first quarter of 2015 and it is expected to be completed by 2021. The contract to manage the new terminal was awarded last year to a consortium led by France’s Bollore. Sie said Bollore will invest a further 200 billion CFA francs for other port infrastructures and equipment which will boost port traffic. Cargo traffic has been on the rise as the country recovers from a decade of political stability. Total tonnage surpassed 21 million tonnes in 2013. *Source theafricareport]]>