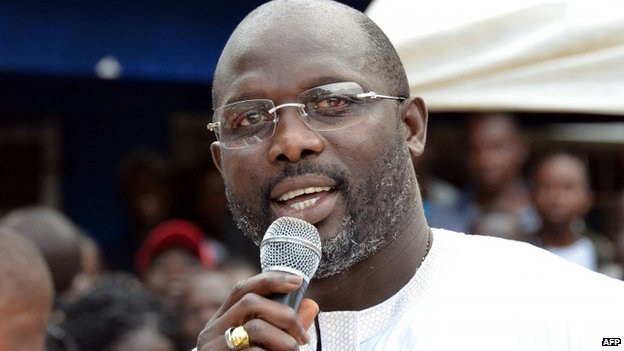 Liberian politician and ex-footballer George Weah speaks during a meeting for the opening of political campaign activities for senatorial elections on November 14, 2014 in Monrovia ©Zoom Dosso (AFP/File)[/caption] Monrovia (AFP) – Football legend and Liberian opposition leader George Weah declared himself a “born winner” Monday, after trouncing the son of President Ellen Johnson Sirleaf in a Senate election in the Ebola-ravaged country. In his first victory at the polls since he went into politics 15 years ago, Weah won by a landslide in Montserrado county, the most populous in the west African country, taking 78 percent of the vote in a race against Robert Sirleaf. “I am a born-winner,” the ex-AC Milan goal ace told AFP. “I have always defeated Madam Sirleaf in Montserrado. The son could not do what the mother did not. “I have always won the elections, but my victories were stolen from me,” he claimed. The only African to take the Ballon d’Or as European footballer of the year, Weah won the first round of the 2005 presidential election, but lost the runoff to Johnson Sirleaf. He lost out again to her in 2011 when he was the vice-presidential candidate on the opposition Congress for Democratic Change ticket. “It is time now to work for the people of Montserrado and that is my priority,” he said. Weah, a popular figure in Liberia since his days as a deadly centre-forward, told AFP in May that he intends to run again for president in 2017. Robert Sirleaf, who took only 10.8 percent in the much-delayed December 20 poll to fill half the seats in the Senate, conceded defeat on national radio. “I congratulate Mr. Weah for his victory. I thank all those who voted for me. I will continue to do what I have been doing for the people of Montserrado,” he said. Among other winners in the poll — put back three times by the epidemic which has killed 3,384 in Liberia — was Jewel Howard Taylor, a former wife of ex-president Charles Taylor (1997-2003), who has since been convicted of committing war crimes and crimes against humanity in neighbouring Sierra Leone. She was reelected in the central Bong district, which she has held since 2005. The country’s electoral commission said it had received complaints from candidates in three counties. But spokesman Joey Kennedy said: “That does not stop the process. The winners will be certificated on Saturday. “The cases of protests will go to the Supreme Court. Any decision from there is what we will go by,” he added. *Source AFP]]>