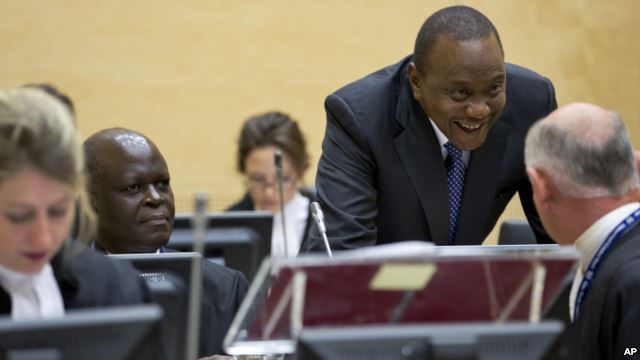 Kenya President Uhuru Kenyatta, second right, talks to his defense team when appearing before the International Criminal Court in The Hague, Netherlands, Oct. 8, 2014.[/caption] I have learnt that the Prosecutor of the International Criminal Court has withdrawn the case against me. I am excited by this news, which I have awaited ever since the day my name was announced to the world in connection with the case. I am also deeply relieved by this decision, which is overdue by 6 years. I have repeatedly declared my innocence to the people of Kenya and the whole world. I repeat this even now: as relates the incidents comprising the Kenyan cases at the ICC, my conscience is absolutely clear. It has always been my position that the Kenyan cases at the ICC were rushed there without proper investigation or preparation, and sustained by a strong interest to stigmatise accused persons. As an institution of the international community, victims of serious crimes and people around the world had a right to expect the Court to dispense justice with integrity and without undue considerations. For the Prosecutor to sustain an obviously deficient case for so long demonstrates beyond doubt the intensity of pressure exerted by improper interests to pollute and undermine the philosophy of international justice. There is no justice when human rights clubs and an international tribunal conspire to betray victims of human rights abuses and persecute the innocent. The tragedy of this travesty is beyond words. The victims in this case will get no satisfaction from the ICC, owing to the Prosecutor’s decision to compromise a quest for justice in favour of political considerations. This is an incomparable tragedy. Just as the ICC failed me, it has also failed the victims of the 2007-2008 post-election violence. They were killed, maimed, displaced, dispossessed and utterly traumatized. I have been victimized, libeled and senselessly profiled by the same defective process. https://www.youtube.com/watch?v=_lQVNb_6BF0 The Government of Kenya has sustained its efforts to restitute and reintegrate the victims of the PEV as best as it can. Our justice system continues to process the cases which have been instituted. I have supported these efforts because ultimately, the victims must get justice. The world may have failed them, but they will not be let down at home. The Prosecutor opted to selectively pursue cases in a blatantly biased manner that served vested interests and undermined justice. As a result, the Court has had to pay a steep reputational price, which it will continue to face unless a serious and systemic rethinking of the International Justice framework is undertaken. My brother and deputy, Hon. William Ruto, as well as Mr Joshua Sang continue to face their accusers at the ICC with a clear conscience. With me, they have been steadfast in declaring their innocence. I am confident that they will be vindicated in due course. I stand with them, and will support them and pray with them until that time. As my deputy and principal assistant, William Ruto is an indispensable asset in my Government. I look forward to the day when we shall not have the distraction of the trials, so that we can continue delivering our transformational agenda to the people of Kenya. https://www.youtube.com/watch?v=xAFCjdi3BFE I thank the people of Africa and all their leaders who, through the African Union, demonstrated robust and unflinching support by word and deed, in the true spirit of African brotherhood. Your solidarity has deeply touched and inspired me. I urge you to continue supporting us as we give my Brother William Ruto and his co-accused, Joshua Sang support and solidarity to confront the last outstanding case. Fellow Kenyans, I thank each and everyone of you for your support, prayers, words of encouragement and best wishes. God has not let us down. God will never let us down. As we promised, we have not, and shall never let the cases sully our sovereignty, or get in the way of managing the affairs of our nation. Thank you, and may God bless you. *Statement was shared on Kenyatta’s Facebook page]]>