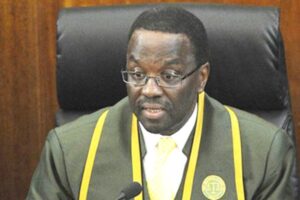 Dr Willy Mutunga is Chief Justice and President of the Supreme Court of Kenya[/caption] I have had a long association with the academic, author, documentary maker, and tree shaker, Professor Ali Mazrui, who died a little more than a month ago. I borrow the metaphor “Growing up with” from the title of renowned Professor Karim Hirji’s autobiography, Growing Up with Tanzania, to reflect on just a few inspiring encounters over the decades I have had with the intellectual giant of Africa. Mjomba Ali died in Binghamton, New York, on October 12, 2014. He was 81 years and 8 months old. I remember Mazrui particularly in context of debates at the University of East Africa in the 1960s and 1970s, which were as ideological as they were political. There were professors on the left and on the right with liberals in the middle. It was the era of the Cold War and this was reflected intellectually, ideologically, and politically at the university. The debates were among great African, regional, and global scholars such as Walter Rodney, Giovanni Arrighi, A. J. Temu, Justinian Rweyemamu, John Saul, Tamas Sczentes, Yash Tandon, Abdalla Bujra, Mahmood Mamdani, Karim Hirji, Issa Shivji, Dani Nabudere, Omwony Ojok, Henry Mapolu, Aki Sawyerr, Kwesi Botchwey, Marjorie Mbilinyi, Yash Pal Ghai, Dharam Ghai, John Samuel Mbiti, Okot p’Bitek, Ngugi Wa Thiong’o, Micere Mugo, Sol Piciotto, among many others. Dar es Salaam College of the University of East Africa became the liberation Mecca for many liberation movements: ANC, Frelimo, Swapo, Polisario, PLO, Black Power and Black Panthers, among others, with President Mwalimu Julius Nyerere providing the intellectual, ideological, and political umbrella that nurtured these great debates. Dar University was a great institution of higher learning to be in during the 1960s and the 1970s.  I regard myself as having been very fortunate to be a student there during that period. First encounter I first met Mjomba Ali in 1969 while a student at the Dar es Salaam University College. Then teaching at Makerere University, he was in Dar to attend a conference. In those days academic conferences took place on a regular basis under the auspices of the University of East Africa. I attended many of them when Mjomba Ali presented papers. Needless to say I saw and heard the great academic, scholar, wordsmith, intellectual, nationalist and pan-Africanist, and radical liberal at his brilliant best. In his modesty and humility Mjomba Ali was later to confide in me that he believed that he lost his debate against Walter Rodney which took place at Makerere University in 1970. Reflecting on these debates it is easy to understand why a radical liberal would have a following among the students. The ideological debates between the right and the left were at times brutal, dogmatic, and ruthlessly critical. Students who wanted to hear and reflect on arguments from both sides of the ideological divide must have found Mjomba Ali’s middle position attractive. And Mjomba Ali remained consistent in that position while some of the scholars moved from one extreme to the other. We seem to have come a full circle in the 20th century with the middle, social democracy, being the basis of historicising, problematising, and interrogating the still dominant paradigms of neo-liberalism and socialism. The search for a paradigm that will liberate the world continues in earnest. The clarion call, the revolutionary slogan and resolve, A luta Continua, remains relevant. Autobiography Shy 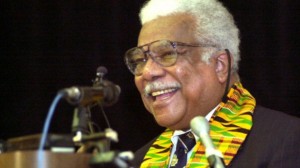 Professor Alamin Mazrui, Mjoba Ali’s nephew, and I had been keen to write Ali’s biography. We raised the issue with him. He did not want to say no to us, but upon reflection he was not very keen about the idea. He, however, did not disappoint because he suggested we could edit his great debates with scholars; that we proceeded to do in three volumes. I have always had this nagging feeling that Mjomba was never keen on the idea of an autobiography or biography. I should have figured out this when Alamin and I edited his debates! If you are a giant of a scholar who is constantly and continuously being debated, written on, critiqued, your story gets told permanently and indelibly.   As Chief Justice and President of the Supreme Court of the Republic of Kenya it was my great pleasure and privilege to host Mjomba Ali and Professor Robert Martin a year ago at the Judiciary. Mjomba Ali spoke to the judges about law and politics under the 2010 Constitution of Kenya. This was a timely intervention, particularly for judges who still nursed the idea that “the law is the law is the law” under the said Constitution. The Constitution of Kenya is not a legal-centric document and it requires a multi-disciplinary approach to its interpretation and implementation. It is a Constitution that fundamentally subverts staunch positivism. As an African who believes in my protection by the spirits of our ancestors, as creations of God, I have no doubt the Spirit of Mjomba Ali will watch over us as we continue to grow with him. I am sure more debate about his work and greatness will continue on earth for many centuries to come. I pray he will debate Walter Rodney yet again when their paths cross, this time round with clearer results! May the Almighty Allah rest his soul in eternal peace! *Dr Willy Mutunga is Chief Justice and President of the Supreme Court of Kenya.  ]]>