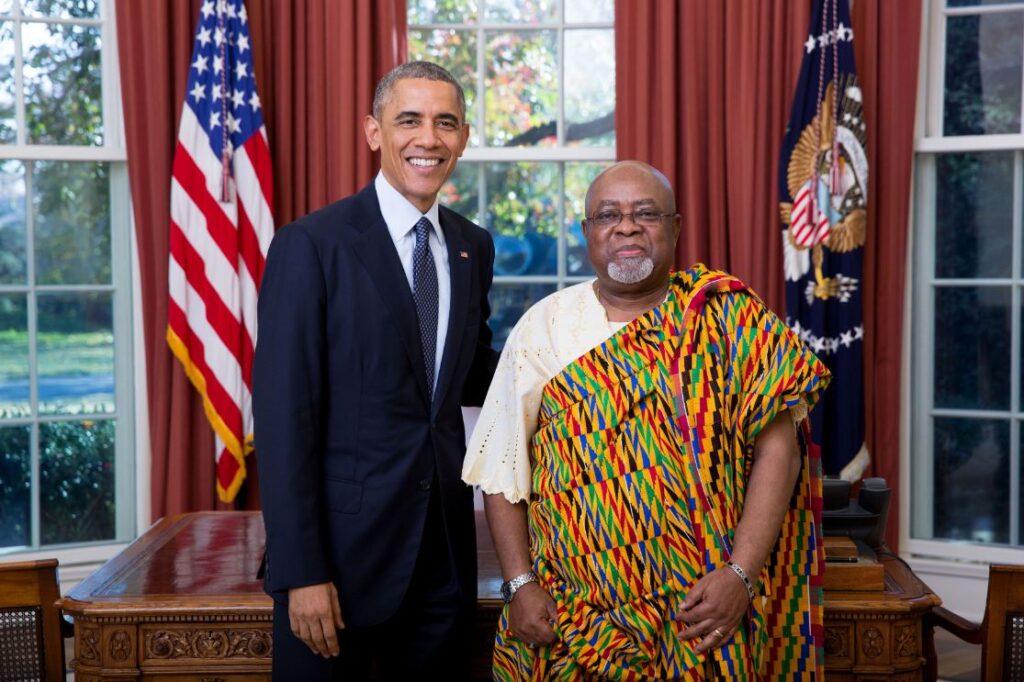 U.S. President Barack Obama with Ambassador Lt Gen. Joseph Henry Smith of the Republic of Ghana.[/caption] Ghana has expressed her satisfaction and appreciation for the support the United States of America (USA) has given to her budding democracy which has been touted one of the most successful on the African continent. His Excellency Lt. Gen. Joseph Henry Smith, Ghana’s Ambassador to the United States of America, expressed the sentiment when he presented his letters of Credence to President Barack Obama of the United States of America at a ceremony at the White House on Tuesday, November 18, 2014. Ghana’s relationship with the United States, remain warm and cordial, he said, adding that in recent years, it has blossomed into a dynamic one spreading into several areas of mutual interest, deepening political, economic and culturalties between the US and Ghana. Ambassador Smith said Ghana and the US continue to work together on wide range of issues such as economic growth and development, democracy and good governance and peace and security and improving the state of bilateral relations between the two countries. His Excellency, Lt Gen. Smith emphasised Ghana’s commitment to the values of democracy, such as the respect for human rights, good governance, rule of Law, freedom of the press, an independent judiciary, accountability and strong institutions of State. He commended the US for the various initiatives it has taken to improve the lives of people on the African continent such as Feed the Future, the young African Leaders initiative and power Africa, which are all geared to help educate and prepare the youth of Africa as the next generation of leaders. Ambassador Smith also commended President Obama for hosting the US-African Leaders’ Summit, saying it was indicative of the growing importance of Africa on the global stage and the realization by the US administration of the gains to be derived from such relationship. On the successful completion of the first Millennium Challenge Compact (MCC), the Ambassador expressed Ghana’s appreciation to the government and people of the US and thanked the US President for the second MCC signed on Tuesday, August 5, 2014 at the cost of 498 million dollars to revamp Ghana’s energy sector. He said the second compact falls in line with Government of Ghana’s vision of becoming the energy hub of the sub-region and will also enable the government meet its commitment of increasing power generation to meet domestic consumption as well as demands by neighbouring countries. Ambassador Smith was full of praise for President Obama and conveyed the appreciation of His Excellency President John Dramani Mahama for the US’s handling of the Ebola Virus Disease (EVD), which is devastating the three countries at the centre of the disease. The Government of Ghana, he said, is convinced that with the assistance and collaboration of the US government and the International Community, the sub-region will be in a position to stop the spread of the deadly virus. Ambassador Smith assured President Obamaof his commitment to ensuring the strengthening of the already cordial relations that exists between Ghana and the US during his tenure. Receiving the credentials of His Excellency Lt. Gen. J. H. Smith as Ghana’s Ambassador to the US, President Barack Obama described Ghana as a beacon of democracy and a model for openness and transparency. Ghana’s election as Chair of the Economic Community of West African States (ECOWAS), presents an excellent platform for Ghana to play an even greater regional leadership role, he said. President Obama said Ghana’s commitment to regional security by deploying peacekeepers to numerous conflict zones, including Mali, makes her a key US partner on security initiatives in the region and that the US can count on Ghana’s support on counterterrorism, counter-narcotics, combatting human trafficking and strengthening regional maritime security. He said the US is proud to have Ghana as a partner in the new initiatives announced during the historic US-African Leaders’ Summit which include security governance initiative, the African peacekeeping rapid response partnership and the early warning and response partnership. President Obama said the signing of the second Compact worth 498 million dollars with Ghana during the August Summit advances his partnership for growth and power Africa initiatives in Ghana and cements the US’s development partnership with President John Mahama, the Government and people of Ghana. The US government, private sector, academic institutions and civil society organisations remain vital partners in strengthening Ghana’s proud international standing, the US President said, adding “I look forward to working with you to advance our common agenda and deepen the strong and abiding friendship of our countries”. *Source:Information section Ghana Embassy Washington DC]]>