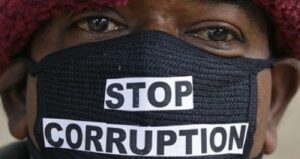 A Ghana pressure group is mobilising ordinary people to join peaceful protests against corruption begging on Tuesday, amid concerns graft is getting out of hand in the West African country. Citizens Movement Against Corruption says protestors should wear red or orange and raise their index finger at noon to indicate that they are fed up. “Blow your car horn and put on your headlights to hoot against corruption and corrupt persons, bang your saucepans to drive corruption away and change your display pictures and status on social media to “fighting for a Ghana without corruption,” the group said in a statement. According to the Global Corruption Report 2013, 73% of Ghanaians strongly believe that ordinary people can make a difference in the fight against corruption. Corruption remains a headache for President John Dramani Mahama’s administration, which has been massively criticised for doing little to stem the tide. However, following public outcry over millions of Ghana Cedis siphoned into private pockets last year, Mahama instructed the attorney general, Justice and Finance ministers, to recover all the money wrongfully paid to individuals and companies through contracts. Government agencies like the Youth Entrepreneurial and Employment Development, Savanna Accelerated Development, Revenue Authority and the country’s human rights commissioner have been accused of misusing public funds. On Monday, the government recovered GH¢14.5 million that was legally paid to contractors under the Ghana Youth Employment and Entrepreneurial Development Authority. But Mahama blamed the public for deliberately pushing public servants for “unacceptable favours” which, he said, subsequently compelled some of them to engage in corrupt practices. *Source theafricareport]]>