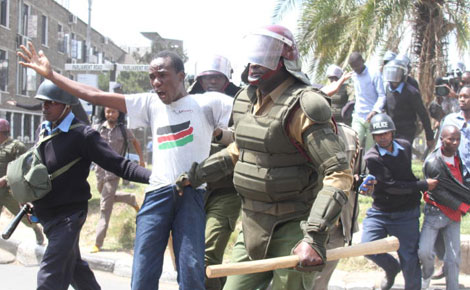 Human rights activists being frog-marched by police officers outside parliament buildings during a protest against the security bill in December 18, 2014. (Photo:File/Standard)[/caption] President Uhuru Kenyatta’s administration will next year strive to clean up perceptions of having adopted suave dictatorial tendencies in pushing through its political agenda. The passage of the Security Laws (Amendment) Bill, 2014, under acrimonious circumstances, provided the latest platform for these claims.
The security bill was passed and subsequently signed into law by the President despite accusations by the Opposition that the drafters had ignored key constitutional provisions with regard to the Bill of Rights and other freedoms. The media were also up in arms over clauses described as ‘draconian’ and which it said will take it back to the old days of both State and self-censorship. The de-registration of over 500 non-governmental organisations was criticised as yet another attempt by the Government to entrench “Executive dictatorship” in the running of the country’s affairs.
State actions in 2014 sometimes left both the Opposition and civil society in an awkward situation as they appeared unable to deal with a ruthless administration.
In the National Assembly, the Jubilee Government used its numerical strength to defeat the Opposition on a number of critical issues even when substantial points of argument were raised by its MPs. According to Wainaina Ndung’u, the Executive Director at International Centre for Policy and Conflict, some of the actions of the State, including the passage of the security bill point to a paranoid government out of touch with the concerns of Kenyans.
“They came to power seeing shadows everywhere. They are very sensitive on criticism. Rather than address the concerns being raised by Kenyans, they have bastardised these concerns and we are now dealing with an extremely intolerant government, which rules by law, rather than the rule of law,” said Ndung’u.
In the wake of the passage of the security bill, Senate Minority Leader Moses Wetang’ula echoed the views of many opposition politicians who painted the Kenyatta administration as dictatorial. “If you ever needed proof that the country is relapsing into dictatorship, this is it,” said Wetang’ula. However, according to Jubilee leaders, the perceptions that the Government was seeking to return the country back to dictatorship is misplaced.
Gatundu South MP Moses Kuria dismissed those peddling the dictatorship claims, saying the Government was only interested in pursuing its development agenda as outlined in its manifesto.
“Over the past years, we have witnessed that we cannot solve a problem from same consciousness that created it. You cannot use liberal democracy to solve complex issues. The issue about dictatorship is an argument without any proof. On the security bill, it is for no any other purpose apart from securing this country,” said Mr Kuria.
In a recent Facebook post, former journalist and political exile Pius Nyamora also argued that the political situation in the country poses no danger to the country’s democratic gains.
“For me, I am seeing progress in Kenya because the majority of Kenyans are aware of their rights. I am comparing the Kenya we had before the 1992 election and the Kenya of President Uhuru Kenyatta and millions of enlightened young Kenyans, who will never allow anybody to take them back to dictatorship,” he said.
Although the political environment in the coming year is still unpredictable, the cat and mouse game between the Government and its critics is bound to continue. It will be interesting to watch what strategy the Jubilee government will use in 2015 to counter the opposition onslaught.
*Source standardmedia
]]>
0