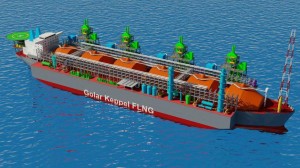 The agreement is premised on the allocation of 500 bcf of natural gas reserves from offshore Kribi fields which will be exported to global markets via the GoFLNG facility Golar Hilli, now under construction at the Keppel Shipyard in Singapore. The project will be located 20km off the coast of Cameroon. Golar will provide the liquefaction facilities and services under a tolling agreement to SNH and Perenco as owners of the upstream joint venture who also intend to produce LPG for the local market in association with the project. It is anticipated that the allocated reserves will be produced at the rate of some 1.2 million tons of LNG per annum over an approximate eight year period. Definitive commercial agreements are expected during the first half of 2015 and that production will commence in the first half of 2017.  The project will be the first floating LNG export project in Africa and will see Cameroon joining the small number of LNG exporting nations. Keppel was awarded the Hilli contract in July. The project is the world’s first-of-its-type conversion of a Moss LNG carrier, the Hilli, into an FLNG, and the contract included options for another two similar units. One of the additional options was taken up in September for a similar conversion on the Gimi. Golar is one of the world’s largest independent owners and operators of LNG carriers. Golar’s innovation delivered the world’s first Floating Storage and Regasification Units (FSRU) based on the conversion of existing LNG carriers. The project in Cameroon now demonstrates Golar’s latest strategic move to extend its business model further upstream by deploying its floating liquefaction technology (GoFLNG). The objective is to become the industry’s leading integrated midstream LNG services provider, supporting resource owners, gas producers and gas consumers. *Source maritime-executive]]>