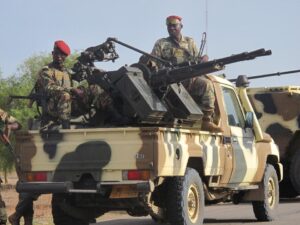 A convoy of Cameroonian soldiers reinforces the military against Boko Haram militants in Dabanga, on June 17, 2014. (AFP Photo/Reinnier Kaze)[/caption] YAOUNDE—Cameroon says it is recruiting 20,000 more defense and security forces to fight Boko Haram following reports that the terrorist group, based in Nigeria, is recruiting young Cameroonians to fight for them. Senator Haman Paul, who hails from northern Cameroon, told VOA about Boko Haram’s recruitment of young Cameroonians to fight for the creation of an Islamist caliphate in northern Nigeria. “That was something that we witnessed in Maroua (in Northern Cameroon). People told us actually that they found people in town that were not actually people that they were used to. Listen when you (the government of Cameroon) find that one part of the country is in a very delicate situation, you better manage prevention and facts instead of consequences,” said Paul.

Another lawmaker from northern Cameroon, Sali Dairou, said just last week that Boko Haram seized cattle from Cameroonian ranchers who lived along the border with Nigeria’s Borno and Adamawa states, a stronghold of the militant group.  He said the ranchers have lost thousands of cattle. Dairou said the militants also killed some of the cattle ranchers, and thousands of their cows went into the wild. He said this was a huge loss and no rancher has the courage to go to the boundary with Nigeria and bring back his remaining cattle. Cameroon’s Minister of Territorial Administration, Rene Emmanuel Sadi, said the threat posed by Boko Haram has led many people from the border areas to flee. He said northern Cameroon is the hardest hit as many schools have remained closed and people are abandoning their farms and cattle. Economic woes Sadi said Boko Haram has paralyzed trade between Cameroon and Nigeria that has supplied 80 percent of foodstuffs and basic necessities to northern Cameroon since the two countries gained independence more than 5 decades ago. He said adding to the woes of the economy of northern Cameroon is the fact that Nigerian fuel, which is widely used, is no longer available. Business transactions and commercial activity have been completely halted by Boko Haram. Cameroon’s Defense Minister Edgard Alain Mebe Ngo’o said that besides the economic hardship, atrocities committed by the militant group have led to a massive movement of more than 30,000 villagers to areas of the country away from the border. He said fear gripped the people when Boko Haram started arresting and publicly killing religious leaders and chiefs who collaborate with the government of Cameroon in some villages that neighbor Nigeria’s Borno state. Another effect of the unrest has been that commercial banks are unable to recover loans granted to farmers and cattle ranchers and now have decided not to give loans to people along Cameroon’s border with Nigeria. Increased security Cameroon’s Police Chief Martin Mbarga Nguelle said that in response to all of this,  the country has decided to recruit some 20,000 defense and security forces  to fight and restore security in the border areas. He said Cameroonian president Paul Biya has instructed him to recruit 4,700 policemen this year and 5,000 next year. The military is also recruiting at least 6,000 Cameroonian youths this year. Cameroon joined Nigeria, Benin, Chad and Niger in sharing intelligence and border surveillance. Cameroon is working with the four African nations plus the United States, France, China and Germany in a new regional African effort against the extreme Islamists. Boko Haram has been working to impose Islamic Shariah law in Nigeria.
*Source VOA]]>