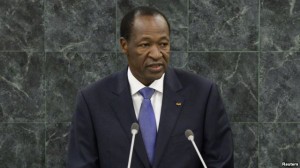 FILE – Blaise Compaore addresses the U.N. General Assembly as Burkina Faso’s president, Sept. 25, 2013.[/caption] A leading opposition member in Burkina Faso has rejected calls for the repatriation of former President Blaise Compaore, who was recently forced to step down and flee the country. Ablasse Ouedraogo echoed transitional President Michel Kafando’s statement that the repatriation of Compaore should not be a priority for the administration, which is tasked with ushering the West African country into elections next year. His comments came after some Burkinabes called for the extradition of Compaore to account for alleged corruption and human rights violations during his 27-year rule. Ouedraogo said he supported the president’s decision not to endorse calls for Compaore’s extradition. “We do understand that the government has a road map, and the main objective of the transition is to organize transparent, equitable [and] good elections at the end of the transition, and they have only 12 months for this mission,” he said. But the opposition leader said the judicial system should be overhauled to ensure its independence ahead of a possible extradition in the future. “We have to work to rebuild the justice [system] in Burkina Faso,” Ouedraogo said. “And if we consider that for the time being we have the right justice in Burkina Faso, starting by calling for the extradition of Blaise Compaore makes sense. Because I do think he has to respond [to the] many things which happened when he was head of state.” Some opposition supporters say Compaore should be extradited to face Burkinabe justice only after a new president has been elected next year. Ouedraogo said the transition government could begin an investigation into some of the alleged human rights violations under Compaore’s leadership. “A certain number of sections will be undertaken by the government in place,” he said. “For sure, in 12 months it is difficult to complete all the actions they are going to undertake. But if these actions are underway, the elected government coming in place would have the obligation, I think, to continue. So, we need change, and the change has started in Burkina Faso with the transition. Let’s [continue] with it.” Ouedraogo said he was so far comfortable with the transition government’s work to lead the country to next year’s vote.
*Source VOA]]>