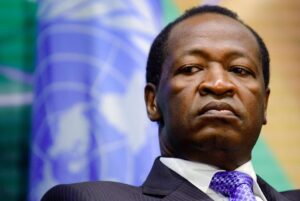 Ouagadougou (AFP) – Burkina Faso’s interim government said Monday it was suspending the party of ousted president Blaise Compaore, who is now in exile in Ivory Coast.

“The party named the Congress for Democracy and Progress (CDP) has been suspended for activities incompatible with the law,” said Auguste Denise Barry, who heads the equivalent of the interior ministry, said in a statement.

Compaore fled Burkina Faso on October 31 after being ousted in a revolt sparked by his bid to extend his 27-year hold on power.

The military seized power and made Lieutenant Colonel Isaac Zida interim prime minister. Faced with intense international pressure, the military eventually agreed to hand power over to an interim government, and Zida was given the temporary premiership until elections are held in November 2015.

The CDP was created from 13 pro-Compaore groups in 1996 and was a pillar of his regime, winning every election and, after 2007 elections handed the strongman president an absolute parliamentary majority.