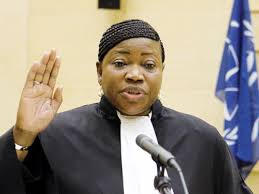 ICC’s Fatou Bensouda[/caption] On the 3rd of December 2014, the Judges of Trial Chamber V (B) of the International Criminal Court (ICC) found that the Government of Kenya had failed to adequately cooperate with my investigations in the case against Mr. Uhuru Muigai Kenyatta. The Chamber stated, “[it] finds that, cumulatively, the approach of the Kenyan Government […] falls short of the standard of good faith cooperation” and “that this failure has reached the threshold of non-compliance” required under the Rome Statute. In its ruling, the Chamber, therefore, found, “[…] that the Kenyan Government’s non-compliance has not only compromised the Prosecution’s ability to thoroughly investigate the charges, but has ultimately impinged upon the Chamber’s ability to fulfill its mandate under Article 64, and in particular, its truth-seeking function in accordance with Article 69 (3) of the Statute.” This is a significant finding. The Judges have thus determined the status of the Kenyan Government’s cooperation in the case against Mr. Kenyatta. Contrary to the Government of Kenya’s public pronouncements that it has fully complied with its legal obligations in this case, the ruling has confirmed that in fact it has breached its treaty obligations under the Rome Statute by failing to cooperate with my investigation. I have persistently sought to secure the cooperation that my Office required from the Government of Kenya in this case in order to execute my mandate. Crucial documentary evidence regarding the 2007-2008 post-election violence, including concerning the conduct of the accused, can only be found in Kenya and is only accessible to the Prosecution through the assistance of the Government of Kenya. This crucial assistance was ultimately not provided, as confirmed by the recent decision of the Trial Chamber. In addition to this failure on the part of the Government of Kenya, my Office has faced other severe challenges, which have hampered my ability to thoroughly investigate the 2007-2008 post-election violence, and ultimately, frustrated the investigations in this case. https://www.youtube.com/watch?v=T7dg2dKkdko These include:A steady and relentless stream of false media reports about the Kenya cases;An unprecedented campaign on social media to expose the identity of protected witnesses in the Kenya cases;Concerted and wide-ranging efforts to harass, intimidate and threaten individuals who would wish to be witnesses.To be sure, the Government of Kenya’s failure to provide my Office important records has had a severe adverse impact on this case. It has deprived the victims of their right to know the full account of what transpired in 2007-2008. It has further undermined my ability to carry out a full investigation. And finally, it has prevented the Judges from carrying out their critical functions of assessing the evidence and determining the truth.Ultimately, the hurdles we have encountered in attempting to secure the cooperation required for this investigation have in large part, collectively and cumulatively, delayed and frustrated the course of justice for the victims in this case]]>