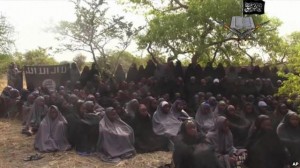 FILE- In this Monday, May.12, 2014 file image taken from video by Nigeria’s Boko Haram terrorist network, shows the alleged missing girls abducted from the northeastern town of Chibok[/caption] The African Union’s (AU) Special Envoy for Women, Peace and Security says she will lead a delegation to meet with mothers of the abducted Chibok school girls in Nigeria. Militants from the radical Islamist group Boko Haram kidnapped over 200 girls from Chibok nearly eight months ago. In an interview with VOA, Bineta Diop says one of the objectives of her trip is to echo the voices of the women and support their efforts to bring an end to the ordeal of the Chibok girls and other forms of gender-based violence. “It’s time for me as the special envoy to go and meet with the mothers and the women of the north to show solidarity,” said Diop. “The solidarity message should continue until we get what we are requesting. And what we are requesting and what the women of the north are requesting is peace and stability in the region. So, we are supporting them and this is the strong message I will carry (with me) when I go to Nigeria.” The delegation, scheduled to arrive in Abuja on Sunday, includes Niger’s top envoy to Ethiopia, Ambassador Diallo Amina Djibo, who is also a member of the AU Peace and Security Council; Leymah Gbowee, a 2013 Nobel Peace Prize Winner and founder of the Gbowee Peace Foundation; and Justice Sophia Akuffo, former president of the African Court of Human and People’s Rights. Diop said the delegation will also meet with civil society groups and officials of the international community to help galvanize support for civil society groups that are working with victims of terrorism. Security The Nigerian government has come under pressure from both local and international rights groups to find and and secure the release of the abducted girls. “I think the 200 girls that have been abducted is really something that nobody should tolerate or continue to tolerate. What we are saying is that the denial of the girls of education, something needs to be done about it,” said Diop. Opposition groups in Nigeria have also criticized the government following an escalation of violence allegedly perpetrated by Boko Haram militants. Nigerian officials have vowed not to relent in their efforts to locate the girls and shut down Boko Haram. Diop said there is need improve security in parts of the country where Boko Haram often carries out violence. “We need to recognize any efforts that have been done either by the government or the military to address this issue of peace and security,” she said. “But, lots need to be done. I think the message is to encourage them, but also to ask that in the region, that our governments be together and do more.” “We are saying that the impact of the conflict on these women is too much. So solutions have to be found. The government should put more effort to bring peace and stability in the region,” said Diop. “I am from West Africa and I think that if Nigeria [should] collapse, then West Africa will collapse. So we need to look at how the region can work within the ECOWAS [regional bloc] and within the African Union to bring peace and stability.” *Source VOA]]>