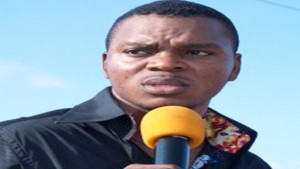 bishop-obinim[/caption] The Ghana Chapter of Amnesty International is demanding the arrest and prosecution of Bishop Daniel Obinim for stomping on the protruded belly of a pregnant woman during an exorcism session in his church. “Such a person should be brought to book…the Police can arrest such a person and investigations conducted,” Executive Director Lawrence Amesu told STARR FM’s Sika Yabani in an interview Wednesday. A 42-second video, which has gone viral on social media, captured the International God’s way church Founder stomping on the pregnant woman during the exorcism session. Several groups, including the MamaYe Campaign and the Alliance for Reproductive Health Rights (ARHR) have condemned the act. Motivational speaker, Reverend Albert Ocran also told MORNING STARR host Kafui Dey on Tuesday that criminal charges must be pressed against Obinim for doing what he did. “Very importantly, crime is crime and let’s draw a line between excesses and crime. “And if somebody steps on the foot of a pregnant person, it is assault and there is criminal prosecution and there is evidence right there and so let’s just go for that,” he said. Amnesty International has also called on religious groups and associations to which Obinim belongs, “to call him to order” because people of his ilk “cannot do whatever they want in society.” “Journalists should not keep quiet. Civil society…should not keep quiet. We should ensure that we bring such a person to order,” Amesu said. https://www.youtube.com/watch?feature=player_embedded&v=QiI0F5gld5s#t=0 *Star FM/Modern Ghana]]>