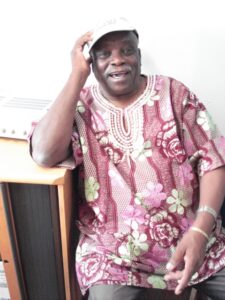 Professor James Kariuki[/caption] In 2004, one of the major South Africa’s national newspapers, City Press, came to an agreement with Professor Ali Mazrui that he would write a regular column for it. The association was not entirely accidental. The paper had acquired a new editor and the new management team had decided to adopt a new ideological orientation summed up in a new motto: Distinctly African. For that, City Press could hardly find a better match than Ali Mazrui. Adoption of the paper’s new motto came in the wake of the historic African Union-organized Diaspora Conference of Intellectuals in Dakar, Senegal. The conference was a formal affirmation that African intellectuals have a role to play in shaping post-colonial Africa and its Diaspora. The launch of the Mazrui column in the City Press came one month after the announcement of 100 greatest Africans of all time. Earlier in the year London-based publication, The New African, had invited nominations from its readers to respond to the question: Who are the greatest Africans of all time? Their editorial offices were awash with nominations. The result, published in August 2004, was a unique mix of some of the most significant Africans in history. But the list of nominations manifested three biases. One was a gender bias: there were very few women in that list of African luminaries. Secondly, there was a political bias. The selected nominees were disproportionately political heroes and giants of statecraft.  Finally, there was a temporal bias in that the nominated Africans ware primarily Titans of the 20th century.  Not enough heroes from the previous centuries were nominated. The list included Ali Mazrui, an African scholar and the distinguished author of the relatively new ‘Africana Column’ in City Press, as a historical hero. Mazrui shared the 50th place with F.W. de Klerk, the former president of South Africa who was instrumental in dismantling apartheid. It was surprising even to Mazrui himself, that of the East Africans who made the list he is the only scholar to have earned that distinction. Literary gaps in the list included the absence of Kenyan novelist Ngugi wa Thiong’o, Tanzania’s Swahili poet Shaaban Roberts, and Okot p’Bitek, author of Song of Lowino, from Uganda.  Mazrui was in splendid isolation among East African academics. African founding fathers of post-colonial era did feature prominently in The New African’s list. Those included Kwame Nkrumah, Robert Mugabe, Jomo Kenyatta, Julius K. Nyerere, Milton Obote and others. Also recognized were some of Africa’s martyrs such as Kenya’s Tom Mboya who was assassinated in 1969, and Dedan Kimathi, who was executed by the British during the Mau Mau war in Kenya. Some of the nominations for historical greatness were obvious such as Shaka Zulu. Some omissions were inexcusable, such as the absence of Menelik II of Ethiopia. It was impressive that The New African recognized that the Diaspora was part of Africa. Thus, the 100 greatest Africans included such Diaspora giants as W.E. B. Dubois, Marcus Garvey, Malcolm X, Martin Luther King, the boxer Muhammad Ali and others. Coincidentally, the idea of selecting 100 greatest Africans of all time followed in the wake of an earlier pan-African proposal by Ali Mazrui for nomination of 100 greatest African books of the previous 100 years. Mazrui made the suggestion at the Zimbabwe International Book Fair in 1988, and the international publishers and others acted upon the proposal. Nominations of great books were invited internationally, and a distinguished panel of judges was set up. Since the concept of 100 greatest African books had originally come from Mazrui, his own books were disqualified from the competition. However, he was recognized as the ‘founding father’ of the whole exercise. When the awards of the final list of Africa’s greatest books of the previous 100 years were at last ready to be given to the authors in Cape Town in 2002, Mazrui was given a special role. This included presenting an award to Nelson Mandela personally for his book written in prison, Long Walk to Freedom.  Just as Mazrui had helped to honor Mandela among the authors of Africa’s 100 greatest books of the century, The New African ranked the same Mandela as the greatest African in history. This was the same year, 2004, when both Mandela and Mazrui were honored with honorary doctorates by the University of Transkei, but this time the great Kenyan novelist, Ngugi wa Thiong’o was included in the honor list. [caption id="attachment_14858" align="alignright" width="168"] 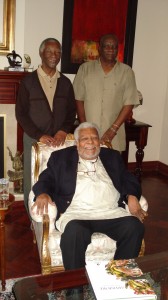 From left standing President Mbeki, Prof James Kariuki & Prof Mazrui seated[/caption] From the point of view of honorary doctorates, the year 2004 was exceptional even for Ali Mazrui.  In that year alone he received four honorary doctorates in four different countries—doctorate in divinity form Lafayette College in Pennsylvania, USA, one in political economy from the University of Transkei in South Africa, another in humane letters from Addis Ababa University in Ethiopia and, finally, one in science and human resource development from the Jomo Kenyatta University of Agriculture and Technology in Kenya. Incidentally, Mazrui was so pan-African that not all Africans knew which country produced him.  As he spent 10 of his formative years as a scholar at Makerere University in Kampala, many Africans believed that he was Ugandan. On the basis of his Swahili affiliations, attire and cultural background, other Africans believed that he was Tanzanian. And since he was married to a Nigerian, some Africans were convinced that he was Nigerian. Finally, because of his four decades residence in the USA, many Africans were convinced that he had become African-American. The New African described Mazrui as a Tanzanian intellectual and writer who represented a positive image of Africa and its people. Mazrui was actually from Kenya but, as the essay here by Uganda’s Jude Kagoro indicates, some other African countries are almost ready ‘to take up arms’ to claim him in death. Mazrui himself regarded the mistake about his nationality as a tribute to his pan-African orientation. City Press newspaper, under the editorship of Mathatha Tsedu, hoped that their association with Professor Ali Mazrui foretold of the golden days when all Africans would be African first and foremost and Nigerians, South Africans and Kenyans last. City Press could not have picked a better choice. Ali Mazrui was the epitome of the golden days’ aspiration. May his soul rest in eternal peace! *James N. Kariuki is a Kenyan Professor of International Relations (Emeritus), now an independent writer based in South Africa. He was a professional and personal friend of Professor Ali Mazrui. He runs the blog Global Africa            ]]>