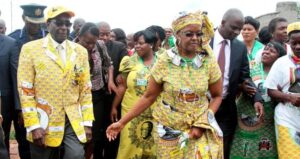 A cat amongst the pigeons: The entry of Mugabe’s wife into the political scene has ruffled feathers. Photo©AARON UFUMELI/EPA/CORBIS[/caption] Two dates dominate the country’s politics: firstly, op- position leader Morgan Tsvangirai will face more challenges when the Movement for Democratic Change (MDC) holds its congress in October; secondly, President Robert Mugabe is playing off one ambitious faction against another in the ruling Zimbabwe African National Union-Patriotic Front (ZANU-PF) ahead of its congress in December. Mugabe, 90, has pushed his wife Grace into party politics, specifically as a president of ZANU-PF’s Women’s League. She is set to win that post at the December congress, catapulting her into the party’s top decision-making body, the Politburo. Now the rival factions – one headed by vice-president Joice Mujuru and the other by justice minister Emmerson Mnangagwa – are trying to ingratiate themselves with the first family. On his return from a fund-raising trip to China, Mugabe convened an emergency Politburo meeting in early September to dampen the latest party ructions. The real game is the succession, but none dare say that aloud. Instead, the Youth League and the Women’s League have endorsed Mugabe as their preferred candidate for the 2018 elections. Party insiders say the new fundamental law adopted via a referendum last year has reinvigorated the succession question. “The constitution makes it clear that the second-in-command will take over in the event that the president becomes incapacitated or dies,” says one of the justice minister’s allies who requests anonymity, “and this is driving Mnangagwa to challenge Mujuru at the congress”. There is competition for other posts, too. Home affairs minister Kembo Mohadi, who was a member of the Zimbabwean African People’s Union (ZAPU) before the unity accord brought ZANU and ZAPU together in ZANU-PF, has put himself forward for the second vice-presidency following the death of John Landa Nkomo in January 2013. If he runs, he would challenge Mujuru’s ally and ZANU-PF chairman, Simon Khaya Moyo, who has been tipped for the second vice-presidency. All is to play for, a taciturn Khaya Moyo tells The Africa Report: “No one strategises in public. At the end of the day, the party has to make a decision at congress, so wait and see.” Opposition disunity saves Zanu-PF Over in the opposition MDC, the leadership struggles are, if anything, even more destabilising. After failing to dislodge Mugabe in last year’s national elections, Tsvangirai has faced growing dissent. He expelled MDC secretary general and former finance minister Tendai Biti and deputy treasurer general Elton Mangoma in April. In turn, they are accusing Tsvangirai of failing to use his power as prime minister in the 2009-2013 unity government to wrest power from Mugabe. With the prospect of more splits, Tsvangirai has called for a congress in October. Already, former energy minister Elias Mudzuri is threatening to compete with Tsvangirai for the party leadership. Tsvangirai says he is confident of fighting off such a challenge. His supporters are pushing for amendments to the party constitution that include the creation of two vice-presidencies and the abolition of the post of secretary general. The bigger question of the opposition’s strategy is unlikely to be settled. Tsvangirai’s proposal for a national dialogue with Mugabe to tackle the economic crisis has been ignored. His offer to form a united opposition front has met a similar fate. ● *Source theafricareport]]>