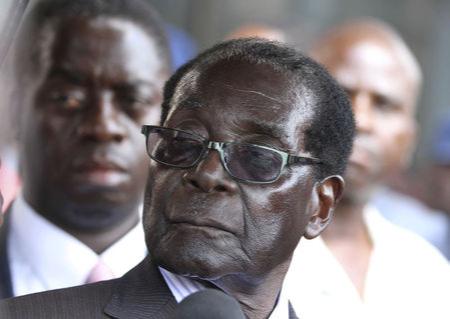 HARARE (Reuters) – Zimbabwe’s president Robert Mugabe has changed the constitution of his ruling ZANU-PF party to allow him to directly appoint his deputies, giving the 90-year-old sole power to anoint his successor, party sources said on Sunday.

Until now Mugabe and his two ZANU-PF deputies have been elected by members from the country’s 10 regions. The deputies automatically took up the same posts in government.

The changes to the ZANU-PF charter enacted at an all-night meeting of its politburo give Mugabe an even tighter grip at a time when deputy president Joice Mujuru has been accused of plotting to oust him at a party congress next month.

ZANU-PF’s chairman told reporters that the party had agreed “far-reaching amendments” to its constitution.

He declined to give details but two senior ZANU-PF members at the marathon meeting of the party’s top executive body told Reuters Mugabe would now appoint his deputies, giving him unassailable control of a party he has led since 1975.

“There will no longer be elections for deputies. They will all be appointees now and the logic is that this will bring cohesion in the party,” one of the officials said.

The changes will be adopted by a larger Central Committee this week before endorsement at the December 2-7 congress, where Mugabe is set to be elected unopposed as party leader.

Proponents of the amendments argued that elected deputies were creating parallel centres of power, the party sources said, leading to factional fights as party members position themselves to eventually take over from Mugabe.

Mugabe, who has run Zimbabwe since independence from Britain in 1980, has refused to name a successor but Mujuru and Justice Minister Emmerson Mnangagwa have long been seen as likely successors when Africa’s oldest head of state dies or retires.

In the last three weeks, Mujuru has been systematically stripped of support, with her allies either suspended or fired for backing her. State media have also accused her of plotting to challenge Mugabe.

Mujuru has denied the charges and says public calls by Mugabe’s wife Grace and state media for her to resign are unconstitutional.