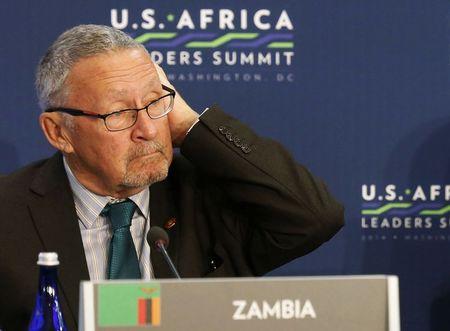 LUSAKA (Reuters) – Zambia’s interim leader announced a presidential by-election on Jan. 20 and called for calm and tolerance amid concerns about a tense contest to succeed President Michael Sata, who died in office last month.

Interim president Guy Scott, who became the continent’s first white leader since the 1994 end of apartheid in South Africa, said he hoped all contestants, both from the ruling Patriotic Front (PF) and opposition parties, would desist from violence.

“It is my prayer that peace continues during the campaigning and the presidential by-elections,” he told a news conference.

Questions about the stability of Africa’s second-biggest copper producer arose when Scott fired a presidential front-runner, Edgar Lungu, as PF secretary-general on Nov. 3, without explaining why.

He reinstated him a day later after violent street protests. Scott is barred from running for president because his parents were born in Scotland.

Supporters of Lungu want the PF’s central committee to pick the party’s candidate, while Scott says a party general conference should choose. No date as been set for the internal vote