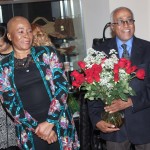 Friday night November 14, 2014 colleagues, diplomats,  community and family members packed the Botswana embassy in Washington, DC to commemorate one of their most accomplished African diplomats: Ambassador Tebelelo Seretse- the first woman Ambassador of the Republic of Botswana to the United States. Telebelo’s relatively long four year tenure in DC had ended and Washingtonians came to express their  appreciation of her great work in this city,  as well as the impact she has had on other cities around the USA especially Maryland and West Virginia.   The spirited  going-away party held at the Embassy of the Republic of Botswana, emceed  by emceed by Innocent Matengu and coordinated by Emolemo Morake, Minister Counselor of Botswana embassy, was bursting with friends and colleagues including HE Neil Parson, Ambassador to Trinidad & Tobago, H.E. Adebowale Adefuye, Ambassador of the Federal Republic of Nigeria, HE Liberata Mulamula, Ambassador of the United Republic of Tanzania and Ambassador Amelia Sumbana, the Embassy of the Republic of Mozambique,  to name just a few. The energetic crowd responded enthusiastically to the speakers at the ceremony, which included Steve Matenje, Ambassador of the Republic of Malawi, who spoke with great wit and charm on behalf of his African colleague; Joyce Mpotu, who represented the Botswana diaspora; and many others from business and academic worlds, including references to her beloved Morgan State in West Virginia which Ambassador plugs as the college that “made her what she is today—a thinking Ambassador.” [caption id="attachment_14226" align="alignright" width="150"] 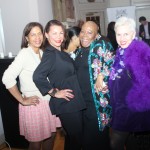 Ladies with attitude.Photo Ben Bangoura[/caption] All had nothing but praises and loving words for Ambassador Seretse, who they referred to as their sister, their mother, their friend…she is an “outspoken person who is not afraid to speak her mind”, a “mainstream diplomat” who has been a beacon for the Botswana people, and a guiding light for Botswana , a stable and prosperous nation in Africa. of the highlights of the evening was an inspiring letter written to the Ambassador by the Honorable Edward R. Royce, Chairman of the House on Foreign Affairs who praised  the Ambassador for her great work for her country.   Before a cheering crowd, Tebelelo said “With everything I heard tonight, I thought I was dying.”  She went on to reflect on some of her accomplishments in Washington, including a strong link between Botswana and US on matters ranging from trade education to tourism, etc. [caption id="attachment_14227" align="alignleft" width="150"] 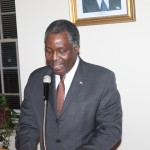 Ambassador Steve Matenje of Malawi delivering remarks on behalf of his colleagues[/caption] Throughout her talk, the Ambassador praised many in the audience for their role in her life during her tenure –some of those included Linda Greene of Greene & Associates,  Jan Du Plain of Cultural Tourism DC’s Passport DC and Sandy Taylor of Welcome to Washington, International Clubs Inc.   The speeches ended with the Ambassador and some of her colleagues sang an African gospel to the ecstatic crowd. The merriment continued into the night with laughter, energetic exchanges and delicious culinary specialties from Botswana. A US educated diplomat, Telebelo was a member of parliament from 1999 to 2004, then several times cabinet minister before she was appointed Ambassador to US in 2011.   Even though she did not reveal her future plans, her American friends continue to encourage her to consider a future Presidential bid in Botswana.  An idea she refused to discuss with AlloConakry Friday.   “Whatever you do Mrs. Ambassador”, says Steve Matenji of Malawi, “don’t forget us at the Banquet table.” *Courtesy of Allo Conakry. Photos by Ben Bangura]]>