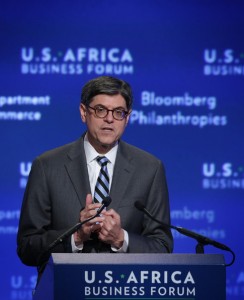 Jack Lew[/caption] US Treasury Secretary Jacob Lew recently paid a visit to the Sokoine electricity supply sub-station in the Ilala District of Dar es Salaam, Tanzania. The expansion of the substation and the construction of at least one of its control rooms are among the many activities scheduled under the African Development Bank (AfDB)-financed Electricity V project in Tanzania. Electricity V will be implemented in Arusha, Dar es Salaam, Mwanza, and in the Shinyanga region of the country. The project consists of the construction of distribution networks, rehabilitation of substations, technical assistance, and project engineering, supervision and management. Its objective is to extend, secure, and improve the supply of electricity to economic sectors and households in rural towns, peri-urban areas and district headquarters. On completion in June 2015, the Sokoine station will provide reliable energy to residents and businesses in Dar es Salaam city centre. The AfDB has injected US $50 million into the project – a US $42.40-million African Development Fund loan and a US $2.9-million African Development Fund grant – which accounts for almost 90% of the total project cost. On the occasion of Secretary Lew’s visit, AfDB Resident Representative in Tanzania Tonia Kandiero said that more than generating electricity, the country needs a stable transmission system. “The AfDB decided to fund the project to support the Tanzania Electric Supply Company Limited in meeting and capturing unsatisfied electricity demand and providing wider access to the service,” she stated. Currently Dar es Salaam city centre experiences regular power cuts mainly because the Sokoine substation has failed to meet and capture growing electricity demand. Actual distribution capacity at the sub-station stands at 15 MVA. Upon completion of the expansion project, capacity is expected to double to 30 MVA. Tanzania’s economy is growing at the rate of 5-7% per annum. The country has faced multiple energy crises in the last decade linked to frequent drought. Without reliable power supply, economic growth is not likely to be sustained. In fact, in its effort to become a middle-income country by 2025, the Tanzanian Government launched its ambitious Big Results Now (BRN) plan to improve power supply nationwide. The plan is receiving support from both the AfDB as well as from the US Government through the Power Africa initiative launched by President Barak Obama in 2013. The AfDB is an anchor partner of Power Africa. *AFDB  ]]>