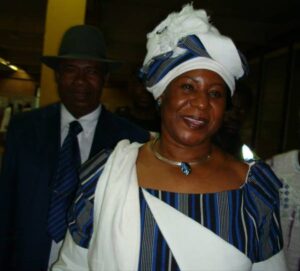 Mariam Sankara[/caption] The widow of late President Thomas Sankara, Mariam, has thrown her weight behind the uprising which toppled President Blaise Compaore in Burkina Faso. It is a vindication of Thomas Sankara says Mariam in a statement full of  gratitude and support to the youth, civil society and political leaders who worked in synergy to thwart designs to change the constitution and forced Compaore out of power. In the statement issued on Nov 1 from Montpellier France, Mariam credits the people of Burkina Faso  for achieving a feat that President Compaore never thought possible by forcing him out of power. Expressing regrets at the death toll, Mariam Sankara said national and international measures should be pursued to make Compaore answer for his crimes. Instead of enjoying a quiet retreat in Yamoussoukro, Ivory Coast, Compaore should be made to answer for crimes linked to him in Burkina Faso and other countries of the sub region, Mariam Sankara said. Wading into the transition debate, Mariam Sankara expressed preference for civilian leadership to manage it, so as to maintain the democratic nature of the uprising. The people of Burkina Faso must remain vigilant and take the fight to the finish line of transparent, free and fair elections Mariam Sankara said.]]>